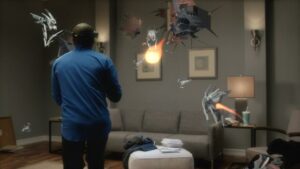 At the Microsoft Devices launch this week Microsoft had a bit of a surprise.  The Xbox One is getting an upgrade.  Not only will there be specialized Xbox versions targeting specific games with unique bundles but Windows 10 is rolling out to every Xbox One in the market.  Pushing the envelope in console graphics.  There is a new Xbox controller coming and it is impressive but, as you would expect, the emphasis was on the games and they showcased a number that will be coming in a few weeks that looked amazing.

But with Hololens coming we got another surprise.  Mixed reality gaming on Hololens.   Code named Project X-Ray.  This is amazing.

Project X-Ray And The Future Of Gaming

First it rendered a virtual gauntlet/ray gun on the players hand and Hololens then used the physical surroundings as a game field.  We could observe as a third party and see the gauntlet and the robots drilling through the actual walls in the room to attack the player.  Photorealistic they then attacked and the player used the gauntlet (which was rendered around a controller) to blow the attackers away.

This was amazing, it put you literally in the middle of game play.  I could imagine Zombie games where Zombies came through the door to your room or home and you fought them as if you were living in a Zombie TV show.

They announced that Hololens would be available to developers for $3K and from the look of folks in the audience I expect that many of these folks will be trying to become one of those developers.  Since it is developers that will make Hololens what it will become it is clear that that our imaginations may be the only limitation to what we can eventually do with this product.

Nobody has anything like this even close to market.  Virtually all of the IP is out of Microsoft including the specialized Holographic processor unique to this offering which had to be designed to blend the real world with the virtual.  Really if you get chance to see this in action it will amaze you.

As I watched the demo I couldn’t help but remember the Holodeck on Star Trek Next Generation. This blending of photorealistic graphics with real stuff was so amazing and so far ahead of anything else I’ve seen out of a lab that it almost felt like I’d stepped into the future.  In talking with some of the folks working on this one had created a virtual pet in his home that was always waiting for him when he arrived.

A lot of us travel too much to have real pets and live alone.  The ability to create a real seeming pet that greeted you and yet didn’t need care and feeding yet seemed to live in the same space you do and wasn’t tied to a computer screen could change lives if it was realistic enough (though petting it could be problematic).

Microsoft partners are working to use this technology to create next generation amusement parks for instance imagine a ride that placed you in Harry Potter’s world where your wand actually worked, or as a Super Hero in the Marvell Universe.

In retail imagine being able to place that couch you find in a store in your own home virtually, or to build that dream kitchen real time as it would look in your own house and walk through that future vision as if you were there?

How about going to Comic-Con and being able to actually appear as your favorite Character or have them virtually merge with the audience and have virtual battles over your head that you could participate in.  OK I can see how that might get a little scary for those that didn’t have Hololens.

But we don’t see transformative technology that often and the ability to change what we see dynamically has potential that few of us will be able to truly see until we try one of these headsets out.

I so want a Hololens but think we’ll all need to wait until the consumer version arrives in a year or so.  For now this product is being focused on developers and corporations who are willing to put in the work to create the transformative experiences we will enjoy when this product finally ships in its final form.  For now it can capture the imagination and showcase what shopping, entertainment, and gaming can become when we merge the real and virtual worlds to create something magical and different.   Who knows, maybe my next job will be a Wizard or Super Hero?   With products like this my only limitation may be my own imagination.

I saw The Martian and …