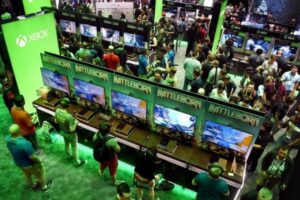 One of the things that fascinates be about industries is how you can often see a disaster coming from outside and you are pretty sure no one in authority inside an industry even saw it coming.  Take the iPod or instance, when it arrived it was pretty clear that CDs were going to be toast and when the Walk-Man showed up years before that LP records were going to be gone.  More recently the arrival of Netflix meant all of those DVD rental stores that were more prevalent than Starbucks would soon go to that big retail graveyard in the sky.  There are two technologies that suggest the games and platform we have been looking at this week may not be around in two years.  Streaming and VR.

As we approached E3 first NVIDIA launched their gaming oriented Shield set top box tied to their Grid service, then Amazon (who has pretty much taken most of retail out at the knees), announced their move into cloud gaming as well.   On top of this Sony, who apparently doesn’t want to be on the wrong side of an iPod like event, bought OnLive and has been streaming old games to their PS4.   Oh, and the guy running Microsoft is out of their Cloud division which suggests there will be additional announcements from them in the coming months.

The huge advantage to the consumer with streamed games is that the hardware doesn’t matter.   Whatever technology you need to have a great gaming experience generally exists on the service side of the equation not on the client side and, because of that, upgrades are done by the service provider and not the user.   You also get the opportunity to subscribe to games, rather than buy them, trial full games, and the option of ad or in-game purchase funded high performance games.   Personally I’m not a huge fan of the whole “in-game purchase” model (primarily because I end up spending more than I’d have ever paid for the game in the first place).

The advantage for the vendor is this pretty much kills piracy because there is no game to pirate.  You could create a clone of the game but you’d have to write the code yourself of find some way to steal it out of a well defended firm.  Oh and there is no resale of the games either which, combined, result in a lot more money to both the game system makers and the game developers (potentially).

VR, Virtual Reality, is much more of a mess right now between technologies like Morpheus tied tightly to a single game platform to Oculus Rift and Vive which are more portable across platforms.  The first raft of head mounted displays just aren’t really knocking my socks off.  They tend to be big and somewhat clunky with the Samsung Gear VR headset (which uses a smartphone) still better than most (and it is on the market today).  However I’ve played some of the early games and they really are far more immersive than I thought they would be though many of the controllers need work.  In a lot of cases, particularly when you need to use something like a keyboard to control the action, more of blend between AR and VR is needed so the system can blend what your hands are doing into the image without destroying the immersive experience and, outside of Microsoft’s Hololens concept, I haven’t seen that.

What is interesting is folks are so excited about this stuff that they are aggressively building content so that when the hardware is ready we should have interesting games to play on it.   However, for the most part, VR won’t be a retail event until 2016 which leaves a lot of room for someone to come in and do something even more interesting.  By the way, setting the bar, is a little firm called Starbreeze which had Project StarVR a truly amazing VR headset.  This is likely where the gaming firms will initially have to go and the fact that this product is from a 3rd party showcases the risk that another platform can emerge and take the market from the dominant players.

Wrapping Up:  An iPod Moment

I think we are at the front end of an iPod like moment where the game industry again pivots to new concepts both where the games are run and how you immerse yourself in it.  While both Microsoft and Sony are clearly in the hunt firms like Amazon and NVIDIA are providing alternatives and little companies like Starbreeze are coming in from the side with game changing hardware.  Apple has even been quietly shifting to gaming suggesting they want in on this opportunity.

I wonder, if we are solidly on a streamed/VR path in two years whether we will even need to go to E3.   We might just attend it virtually from within a massive multi-player game system.  I vote for inside the Star Wars Deathstar!

Call of Duty Heading to PlayStation