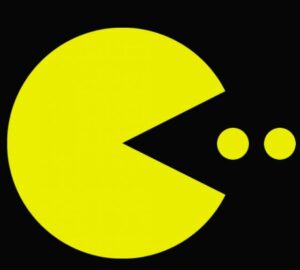 It’s certainly very basic by today’s video game standards, but what self-respecting gamer didn’t play Pac Man back in the day? When video games were the hottest thing since sliced bread back in the eighties, Pac Man was a household name, and now the game is celebrating its 35th birthday.

Pac Man was originally named Puck-Man, a variation of the Japanese word “pucka,” or “to chomp,” but considering it’s too similar to the F-word, they changed it to Pac, and a gaming legend was born.

As CNN reports, fifteen months after Pac Man was released in the States,100,000 full sixed arcade games were sold, and fans plunked down over a billion dollars in quarters to play. The Guinness Book of World Records also tells us he’s the most recongzined video game character in the world. (Reportedly 94% of American people know the name and can recognize his image.)

Pac Man was originally named Puck-Man, a variation of the Japanese word “pucka,” or “to chomp,” but considering it’s too similar to the F-word, they changed it to Pac, and a gaming legend was born.

Some other interesting Pac-facts, thanks to Tech Times:

The original game was only 24 kilobytes, which is “about the size of an average image of Pac-Man on the internet today,” the ghosts were originally all going to be one color (red), but testing among gamers preferred them to be multi-colored, and Pac-Man was yellow because it’s a peaceful color. Pac-Man was also a game designed for female gamers, with his creators reasoning that girls love snacks. (Hey, whatever works, it got the game out in the world, as odd as that reasoning seems.)

If you love old school games, and we certainly have a lot of fondness for all those hours and hours we spent in our youth, you definitely owe a debt to Pac Man, who was a superstar among game characters.

Can airplanes be hacked? Probably.

Is the Fantastic Four’s Human Torch Already Feeling the Heat?