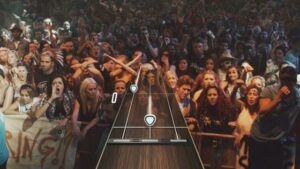 We at TG are very excited about the return of Guitar Hero. While many will think it’s old news, we’re glad to see it back, and now the new game, called Guitar Hero Live, ahs just announced the game’s line up.

As Uproxx reports, “it’s a pretty decent mix of the mainstream, the slightly underground, and the, um, Skrillex.” So the tunes include, in part, Gold on the Ceiling from The Black Keys, Paint it Black from the Stones, Breaking the Law from Judas Priest, Chop Suey! From System of a Down, Higher Ground from the Chili Peppers, Cowboys From Hell from Pantera, Bangarang from Skrillex, Na Na Na from My Chemical Romance, and more.

No official release date for the game, which is called Guitar Hero Live, but later this year is all we know so far. We’re certainly excited about its arrival, and while it’s only been five years since the last game, we hope today’s generation will keep the Hero legacy going. (We’re also curious to see if any good bands will ever come out of the Guitar Hero obsession, which gripped the nation pretty hard years ago, and inspired quite a few kids to want to learn the real thing.)

From Selma to Marvel

10 myths (and some truths) about Apple