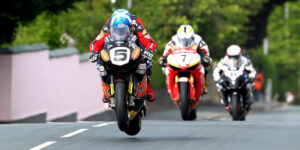 Isle of Man movie directed by Ben Younger to be filmed on the Mountain Course in 2017, cast includes Matt Damon and Liam Neeson with Cameron Donald filling in as stunt double.

After years and years of rumors surrounding a proper Hollywood movie on the legendary Isle of Man TT races, there is now concrete talk of it finally becoming reality. Ben Younger – acclaimed director of Boiler Room (2000) and Prime (2005), had expressed his interest in making a movie on ‘motorcycle racing’ way back in 2006 and it is only fitting that the project will see his expertise in taking shape. Younger is pretty much a racing nut himself – taking the track day route to let off steam every once in a while, and that’s exactly the sort of man you want directing a movie on a subject that is revered by every motorcycling fanatic around the World.

Playing the lead role in ‘Isle of Man’ will be Matt Damon – we’ve seen him riding motorcycles in the Jason Bourne franchise earlier. Damon’s character is said to be an American motorcycle racer who comes out of retirement to contest the World’s deadliest motorcycle race while Liam Neeson’s role in the movie isn’t quite disclosed yet. Filling in for Matt in all the motorcycle racing sequences will be Australian TT star Cameron Donald and the movie is scheduled to be filmed during the 2017 Isle of Man TT races in June.

Reports also suggest that the MY 2017 Honda CBR1000RR Fireblade will be the choice of ride for the lead character and the Japanese motorcycle manufacturer is heavily in on the project.

For the full story, head over to www.motorscribes.com

How Can Technology Help You to cut Down Your Business Outgoings?

How to Define a Startup’s Most Important Sales Metric