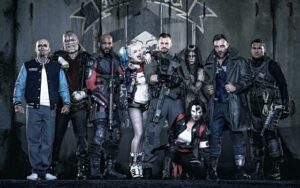 It really seems that professional reviewers are on some kind of bad trip because I’ve gone to movies that they just rave about and thought water boarding would be more fun and I’ve gone to a number of movies they hated and loved them.  Last week, again, I went to a movie they panned and I had a great time.  The movie was Suicide Squad.   And it did around $135M last weekend so a lot of you saw it too.   But, for those that didn’t, here are my thoughts.  (No spoilers).

Be aware for this movie you do have to like DC’s approach to superheroes.  They don’t do comedy well and, for whatever reason, like a little more “bad romance”.  I say bad romance because Batman/Catwomen, Superman/Lois Lane, Lex Luthor/Supergirl were all pretty warped romances.  In this movie we two romances where someone really needed to do an intervention.  Really badly.

The movie does have a slow start but in this case we do need the backstories of some of the team because most folks haven’t seen any of them before.  I generally agree that DC does too many damn backstories and I really don’t need to see Superman coming from Krypton or Batman’s parents getting snuffed one more time, but this time I didn’t even know some of the back stories and I read DC.  By the way, on Superman’s parents, what do you think would happen if you or I decided to put our newborn baby in a rocket?   And hey if you know the world is ending and can build intergalactic rockets in your basement and you’ve known the world would be ending for some time why wouldn’t you build an intergalactic SUV and just go on a long vacation?  Superman’s dad must have really hated the sound of crying babies and the smell of used diapers.  Speaking of that, where did Superman’s baby poop go?   I mean you ever been around a baby? They poop their weight daily and this was a Super baby…   Hmmm, maybe that was what powered the ship?

But I digress, back to Suicide Squad.   I thought the movie was a lot of fun and plan to see it again.  I really didn’t have an issue with any of the main characters and got a kick out of the Joker’s car which I’d been researching anyway because you can buy one relatively cheaply.  (Check it out).

One of the folks’ kind of comes in from the side and gets killed off quickly to make a point while making me wonder if the writer also writes for Star Trek and I was just missing the Red Shirt but it didn’t detract from the movie much (though I still wonder who the hell he was).

So here is the deal and this is quick.  It has decent action with the only disappointment being the previews handled the music better.  I could do an entire movie by the guy who choreographed the previews, but the action wasn’t bad, the previews were just better (not like a lot of movies like the horrid “Secret life of pets” where the preview was the only good part).

I saw the Suicide Squad in iMAX, thought it was a good value, had a great time, and I’d see the movie again.   It was better than Batman/Superman (which I also liked), not as good as Deadpool, and I left thinking that the reviewers that panned it should be fed to Killer Croc.   If you like action and superhero movies go see it, if you don’t, then don’t.   And, you know, given the movie pulled in $135M and ranks in the top 10 already in terms of total revenue for the year after one weekend, I’m thinking most of you folks that bad mouthed it should consider another line of work.  Just saying…

Now if you look at my title I did say Reviewers Review, not movie review, and I’m giving those that panned Suicide Squad one finger up (guess which?).  You folks suuuuck!

The Perks of Online Banking