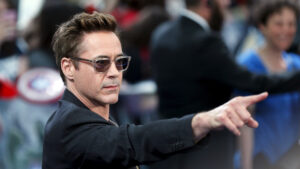 Robert Downey Jr got fans everywhere excited when he shared the poster of Avengers: Infinity War with a merged star cast of Marvel Cinematic Universe (MCU) and the Marvel TV universe (MTVU). The picture was captioned with a single word, ‘excited?’

The fan-made poster got all fans talking about how epic the merger of TV and Netflix superheroes would be if they were to find their way into the Marvel universe. The next Avengers movies is slated for release on 4 May 2018.

Robert Downey Jr is known to share fan-made posters quite often on his Facebook page and this poster can be traced to Movie Pilot where a devoted community is known to speculate wildly on upcoming films.

It was announced the other day that it wasn’t Infinity War part one and two anymore, it was Infinity War and that the second is a connected but definitely distinctly different and as yet untitled Avengers sequel. So even the title on this is wrong right now. And they’ve long suggested crossovers from the TV universes to be unlikely.

The merger between Netflix and Marvel also seems unlikely, with the Russo brothers pointed out how complicated that would be.

Russo brothers in an interview

It’s complicated. When we start to serialize, the way of storytelling is difficult. You have to have a lot of control and focus on the course of history. The films are controlled by a group led by Kevin Feige, so they function as a unit. Other products, even if they are from Marvel, are controlled by others. Then there is the possibility of a crossover, but is more complicated. It is a smaller version of the problem that exists when you think that Fox has the rights to certain characters, and Sony of others. As storytellers, we only have control over what happens in the Marvel movies, but everything is possible, the Spider (which has the rights held by Sony) was possible!

So we can imagine all the glory of what such an epic star cast would look like, but it’s not really happening.