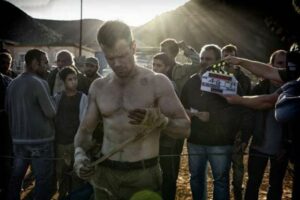 Jason Bourne, as played by Matt Damon across four movies, is forever disappearing off the grid only to reluctantly resurface years later and again menace the CIA. He’s the spy who came in from the cold only to return to the cold, come in again, and, yet again, head back to the cold.

In the chilly and bleak Jason Bourne, the amnesia-ed assassin has been resurrected again, along with director Paul Greengrass, with whom Damon returns to the franchise after a nine year break.

The spy game, already far from a martini-sipping affair in previous installments, is resolutely grim in Jason Bourne.

The superspy, now a hulking mass of bullet-scarred muscle, is spending his days torturing himself in bare-knuckle brawls, haunted by his past.

In shattering set-pieces and terse emotionless dialogue, any remaining sunlight has been drained away. The amount of people brazenly killed by Vincent Casell, the “asset” in Bourne’s pursuit, may well outnumber the words spoken by Bourne in the entire film.

Matt Damon has returned to the franchise after a nine year break. (Photo: AP)

Though first conceived in 1980 by Robert Ludlum, Bourne is perhaps the ultimate post 9/11 hero. Especially in the hands of Greengrass (who also employed his gritty realism in the 11 September drama Flight 93), Bourne is a wrecking ball of accountability for America’s clandestine past.

In Jason Bourne, the digital dragnet is tightening around Bourne. The film is self-consciously set in a post-Snowden world; the CIA is hacked by Nicky Parsons (Julia Stiles, whose smarts have given all of these films a kick), who’s threatening to reveal the covert Treadstone operation.

The film, penned by Greengrass and Christopher Rouse (editor of previous Bourne films, and also this one), introduces a tech magnate (Riz Ahmed) whose celebrated social networking platform is secretly feeding information to CIA director Robert Dewey (Tommy Lee Jones, whose wonderful sad face at this point has everything good and bad about America written all over it).

In a way, Bourne is himself a leak. He’s a rogue weapon who can’t remember his own encryption code. Here, the mystery he’s trying to solve revolves around his father’s role in his initial recruitment.

But aside from updating to today’s surveillance state, Jason Bourne largely sticks to the franchise’s familiar moves, and they often don’t have the same kinetic finesse they used to.

The film is essentially sandwiched between two mammoth, extended set pieces: First, a fiery riot in Athens where Bourne comes out of hiding to meet Parsons; and later, a showdown in Las Vegas that brings him back to US soil.

Julia Stiles smarts have given all of these films a kick. (Photo: AP)

Both outstay their welcome (a vehicle plowing through traffic in Vegas has unfortunate shades of the tragedy in Nice) and the franchise’s propulsion gives way to a pummelling blunt force.

The exception is Alicia Vikander, who enters the franchise as the CIA’s cyber ops head and has her own motives for tossing aside the agency’s old guard. Whenever she’s on screen, her steely but agile presence brightens the film’s dour gaze.

Yet even when Jason Bourne doesn’t click with the same rhythm as its predecessors, it has a weight that outclasses nearly every other big action movie around. National identity is investigated and violence has repercussions: both astonishing things in a summer blockbuster.

But if Bourne re-emerges again, hopefully Greengrass and company can at least give him someone to talk to.

Jason Bourne, a Universal Pictures release, is rated PG-13 by the Motion Picture Association of America for “intense sequences of violence and action and brief strong language.”

Running time: 123 minutes. Two and a half stars out of four.

(This review was published in an arrangement with AP)

Movie Review: Only Margot Robbie Gets a Thumbs Up in Suicide Squad

Is This Really The iPhone 7 Prototype?