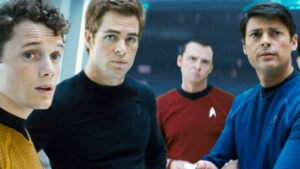 Star Trek actor Anton Yelchin died in a freak accident on Sunday. The 27-year-old, who plays Pavel Chekhov in three Star Trek films, was found crushed by his own car.

Anton Yelchin made his Star Trek debut in 2009, reprised his role in 2013’s Star Trek Into Darkness, and will also be seen in the upcoming Star Trek Beyond in July.

The entire Star Trek community has mourned the loss of their talented young colleague.

Director JJ Abrams tweeted a picture of a hand-written note as a tribute to the young actor.

Anton, you were brilliant, you were kind, you were funny as hell, and supremely talented. And you weren’t here nearly long enough. Missing you.

Sulu actor Jon Cho tweeted his love for his friend.

Zachary Quinto, who plays Spock, uploaded an Instagram picture in fond memory of his friend.

LeVar Burton, who plays Lieutenant Commander Geordi La Forge in Star Trek: The Next Generation, expressed his shock on Twitter.

Karl Urban, who plays Leonard McCoy from the reboot movies, is just as hurt and shocked.

Jonathan Frakes, who plays Commander William T Riker in The Next Generation, referred to Anton Yelchin as a family member, and mourned his loss too.

Anton Yelchin will be seen in multiple upcoming films, including We Don’t Belong Here, Porto, Rememory and Thoroughbred.

Our thoughts are with his family and him.

Benjamin the Bot Wrote The Script for ‘Sunspring’