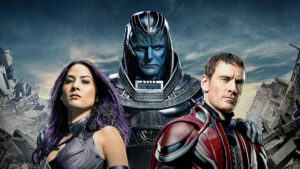 I survived director Bryan Singer’s new film X-Men Apocalypse, which went on for two hours andthirty minutes!  The problem is that all X-Men movies have started to lookthe same… I cannot differentiate one from the other! The previous X-Men movieshad well-defined characters and strong stories, which are unfortunately missing this time.With too many characters, old and new, this film is all over the place.

X-Men Apocalypse is set ten years after Days of Future Past. Ancient mutant Apocalypse(Oscar Isaac) is back, and now he will destroy the world. Isaac’s performance is forgettable – he is such a fantastic actor but this was not a good role forhim!

Sophie Turner, who we also seen inGame of Thrones, is brilliant as Jean Grey. Thereis no way I can get into the details of every character because that will bore you.But I’ll mention a few interesting ones:

Mystique (Jennifer Lawrence) is interesting, but underused. A shame, since she’s such a brilliant actress.

The best part is that you get to see Wolverine, but only briefly. Evan Peters as Quicksilver is amazing.

Compared to the energetic Days Of Future Past, this is awful! The flashbacks and the repetition of scenes get to you after a point of time. Visually, it’svery good but come on! For good visuals, I could just stare at the superheroscreensaver on my laptop and not spend my time and money in the theatre.

Even for X-Men fans, this is a one-time watch!

After Tim Cook, Microsoft’s Satya Nadella to Visit India in May

The Hacker Group Suckfly at War with Corporate India