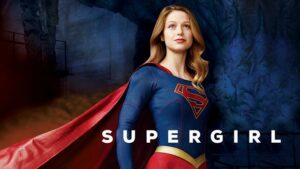 CBS’ Supergirl premiered Monday night and ranked second behind The Big Bang Theory, for the young-adult audience. It did well among this fall premieres too, rating first for adults 18-49.

The reviews for the show’s pilot were good, with a lot of dinky, dorky and cute going around. Variety called it “a very good, polished pilot”, I am still wondering if that is positive or negative. Deadline said “Supergirl is a bounding, deceptively breezy, and eminently watchable addition to both the superhero universe and to primetime. You should really check out the strong and smart series that finally put a woman in the lead in this latest age of superheroes.”, I don’t know which series they saw but I definitely did not get the “deceptively breezy” part of it but if they meant bounding like jumping and bouncing all over the place, then they are right, she did bounce around a lot.

The first episode was decent, Melissa Benoist did a good job as Kara Zor-El, if her task was to play a cute, innocent, half-adolescent supergirl. I had the feeling that the series is neither fish nor fowl, it wasn’t dorky enough to be funny and not dark enough to be a superhero story. But enough people liked it and I might even watch the second episode, might.

If you want to know more about the cast check out the IMDb page.

The Next Generation Of Wi-Fi and Smartphones: Qualcomm 820 and Mu-MIMO