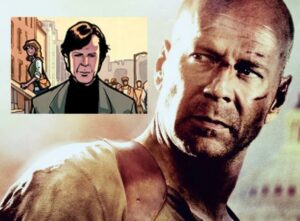 Lorenzo di Bonaventura, the producer of Transformers and G.I. Joe, is teaming up with Len Wiseman, the director of Live Free or die Hard, to make the sixth installment of the Die Hard franchise.

Die Hard 6 will be set in 1979 New York, as a prequel to the original Die Hard movie. A young actor will play the rookie John McClane, showing how he transformed from a normal cop to the hard-to-kill McClane we see in the Die Hard series. Bruce Willis will also be on board, most probably narrating the story of how he earned his stripes.

BOOM! Studios had published a comic prequel to the original movie, called Die Hard: Year One, but it is not clear if the new movie will follow the same storyline. I personally thought that the circumstances in the first movie turned the normal Joe cop John McClane into the “Die Hard” killer machine that grossed nearly $1.5 billion at the box offices. We will just have to wait and see if the makers can live up to the franchise’s reputation.

The Predator X34, a gamer’s delight