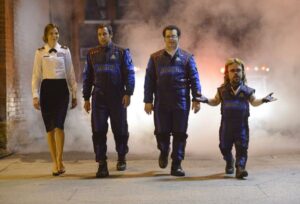 While I’ve never been an Adam Sandler fan, you almost feel sorry for him. Like Cameron Crowe, he was on top of the world, and could have made a movie of himself taking a dump and it would have been an enormous hit. Now it seems the guy can’t catch a break, and his latest, Pixels, hasn’t reversed the trend.

The film almost came in at #1 at the box office this weekend, but got beaten out by Ant-Man, and it’s unfortunate mainly because it was a cool idea for a movie, but the public tide has definitely turned against Sandler.

Variety listed a number of reasons why he’s “no longer a movie star,” including he’s too old to be doing this kind of material, “he’s not edgy,” he hates doing publicity, and “is he even trying?”

And indeed, Sandler needs to reinvent himself, but it’s unlikely he’s got the range to do so. Again, it’s a shame with this one, because the concept was cool enough we were almost willing to suffer through Sandler to hopefully enjoy it.