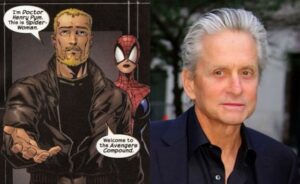 We’re a few weeks away from seeing if Ant-Man will truly deliver the goods or not, but one thing we like about Ant-Man so far is the fact that it’s co-starring Michael Douglas, who I’ve been a big fan of for many years.

I’ve often felt that many serious actors are dying to geek out and do a comics movie, and Douglas told Vulture he’d love to be part of the Avengers team if they’ll let him. (As you’ve noticed in recent Ant-Man ads he’s sharing space with Captain America, showing that he’s going to be part of a bigger Marvel picture in the future.)

Douglas told Vulture, “I’ll go anywhere they want me to. I like this Marvel family. It’s a lovely group. Their track record’s impeccable – I mean that’s 12 in a row, right? Who’s done that?”

Having Michael Douglas as part of the Avengers ensemble would be almost too good to resist, and let’s hope they’ll want him to go there in the future.

Steve Wozniak Weighs In on the Steve Jobs Trailer

EU’s anti-trust case against Google is all about money