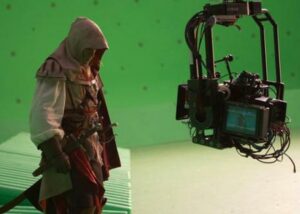 Producer Frank Marshall is clearly a happy guy. He’s produced many big hit films, including Raiders of the Lost Ark, Back to the Future, The Sixth Sense, Jurassic Park, Jurassic World, and the upcoming Star Wars The Force Awakens, which is of course coming in December.

Marshall is also one of the producers of Assassin’s Creed, which will hopefully reach the big screen one of these days. Marshall is very excited about the prospects of the Assassin’s Creed movie, telling the site, “Oh, it’s going to be great.” Other details are fairly mum except Marshall said he’s spoken to some licensing people, and “the movie’s going to be different from the game but the same,” with a laugh.

Marshall also teased that the film should start shooting this Fall, “probably September.” Creed will shoot in London, where Marshall several other Marshall produced movies will also be filming including the next Bourne film, as well as the next Star Wars flick after The Force Awakens.

Assassin’s Creed currently has a release date of December 16, 2016.