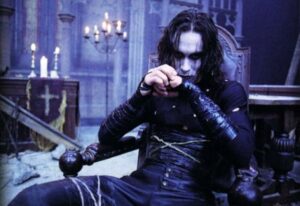 Hard to believe The Crow is over twenty years old, and it was a bittersweet moment when the film was a major hit. It had the potential for a big franchise, but Brandon Lee tragically died on the set.

There have been a number of attempts to bring The Crow back, and that latest was set to roll this year, but now Jack Huston (Boardwalk Empire), who was going to play the title role, has bowed out of the production. Variety says the reason is scheduling issues, and Huston left while the movie was in pre-production in Wales.

As the current director, Corin Hardy, said in a statement, “We look forward to unveiling our new lead and starting to film over the next several weeks.”

The Crow is a great role that many actors would kill for, and this report tells us that Nicholas Hoult (Beast from X-Men Days of Future Past), and Jack O’Connell (Unbroken) are being looked at as possible replacements. (Forest Whitaker is also reportedly up for a role as well.)

The Crow is currently hoping for a release next year.

Gambit Movie Gets a Director