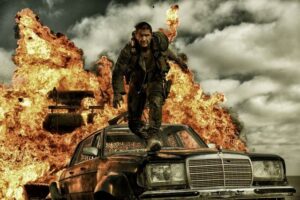 While Mad Max didn’t come in at #1 at the box office this weekend, it’s gotten raves from the critics and moviegoers, many who’ve seen it several times already.

Still, as the Huffington Post tells us, it’s already made over a hundred mill world-wide, and it should apparently do well enough to warrant a sequel. As director George Miller tweeted, “Thanks for all the kind words written and said about the film. We had a lot of fun making it…and there’s more Max to come.”

The next Mad Max flick is going to be called Mad Max; The Wasteland, and as Miller continued, “We’ve got one screenplay and a novella.” Miller had time to write because there were delays while making Fury Road, “and writing all the backstories, they just expanded.”

Tom Hardy has also said that his contract covers three movies if the story will indeed continue, and again, the buzz on the street for Mad Max is really strong, and it’s great to see the movies being reinvented for today’s generation. Here’s to more Max to come, and it’s also great to see George Miller still delivering the goods in his seventies. (Who says directors are all washed up past a certain age?)

Inside Out May Be Pixar’s Best Effort In Years

What’s the point of having security cameras if they suck?