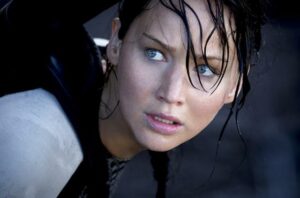 Okay, so The Hunger Games may finally be played out, every ride has to end, but Jennifer Lawrence certainly has a long career ahead of her, and now she’s apparently going to be in the big league that few actresses are in, the $20 million club.

The Hollywood Reporter tells us that Lawrence is starring in a sci-fi movie for Sony called Passengers with Chris Pratt, and she will be making $20 million, even though she has a secondary role to Pratt. Passengers was written by Jon Sphaihts (Prometheus), and it will be directed by Morten Tyldum (The Imitation Game).

This is considered a pretty risky move for Sony because it’s (gasp!) an original movie not based on a previous franchise like The Hunger Games books, but thanks to genre flicks like Hunger and Avengers, Lawrence can now make the big bucks, and Scarlett Johansson isn’t far behind with $17.5 million for the American remake of Ghost in the Shell.

So many talented actresses in Hollywood have gotten the shaft pay wise, now Vanity Fair has raved that Lawrence “is finally getting paid what she deserves,” and it’s in a sci-fi film to boot. (It’s also nice to see there’s indeed life after The Hunger Games and X-Men.)

The Most Important Metric in Social Media