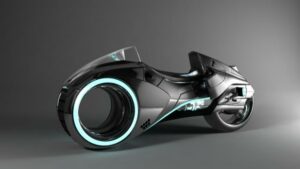 As we reported some time back here on TG, someone built a street legal Tron light cycle, and while something like this would probably mostly appeal to geeks on the open market, the Tron light cycle has always looked cool, and we’d love to see them cruising around on the streets.

Now Gizmag reports that a “fully functioning” light cycle that was built in 2012 in the wake of Tron Legacy is up for auction. It’s also practically a brand new light cycle, only driven around the shop where it’s been stored. This isn’t a case of a used vehicle that has thousands of miles on it already, although you can practically imagine a dealer telling you, “Was only driven to church by an old lady on Sundays…”

This light cycle is part of a collective called the Anderson Collection, owned by a businessman named Chris Andrews, and the people in charge of it just want to thin the heard.

As Gizmag reports, this cycle is powered by 96 V direct-drive electric motor, and this vehicle could potentially be yours if you’re ready to bid on it on May 2, “with a guide price for the bike set at $25,000 to $40,000 without reserve,” this report says.

Guys Who Remade Raiders Shot For Shot Get Their Own Documentary