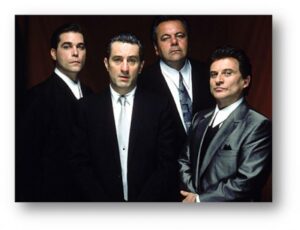 If you love the mob, at least on movies and TV, you have to be a GoodFellas fan. I’m sure there’s plenty who would disagree with me, but I feel it’s the best movie about the mob, even more so than Godfather I and II, which are both extraordinary in their own right of course.

GoodFellas will be turning 25 this year, another anniversary that makes me feel old, because I saw it opening weekend, and still recall my first time seeing it very fondly. Now Rolling Stone tells us that to celebrate the film’s anniversary, it will have a special screening at the Tribeca Film Festival on April 25, with a special Q&A to be moderated by Jon Stewart.

In a statement, Robert DeNiro said, “I was most proud of this film 25 years ago, and equally proud of it now. I’m very happy that it is our closing night film.” Director Martin Scorsese said he is “excited and moved” that the film will be closing the Tribeca Festival, which will show a special 4k scan print, directly from the original camera negative.

GoodFellas has been one of the most influential movies of the last two decades, to the point where you see camera shots and ideas from it everywhere. (It also popularized the one take shot for many directors, like Paul Thomas Anderson.) GoodFellas reinvented Martin Scorsese’s career for a whole new generation of young people, and cemented his status as one of the greatest living filmmakers, if not the greatest. It’s wonderful to see GoodFellas being celebrated on its anniversary, but who really needs a reason to celebrate it and enjoy it?

Will JJ Abrams Stay in the Star Wars Universe?