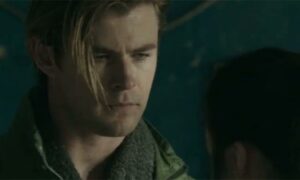 With Michael Mann’s Blackhat, you’d figure the movie had perfect timing. A thriller about hackers, right on the heels of the Sony hack, allegedly by North Korea. As it turns out, being right on time and right up to date hasn’t helped the film at all.

Reviews for Blackhat haven’t been great, with many finding it a cliché action film, which is disappointing to hear from this fan of Michael Mann, who’s been hoping he’d come back with another great movie one day. With American Sniper being the major hit this weekend at the box office, Blackhat got left in the dust.

In fact, it’s box office performance was downright shocking, opening in eleventh place. That’s not a misprint, it came in at eleventh, with a gross of only $4.4 million. While we haven’t seen the film yet, we’re genuinely shocked the movie absolutely tanked like this, especially considering Chris Hemsworth stars, and because, again, it’s very timely with the Sony hack.

With American Sniper making a ton of money, and igniting a lot of controversy, maybe Blackhat is one of those movies where the audience would scream out “rental!” when they see the trailer, or maybe these days you’d yell “streaming!”