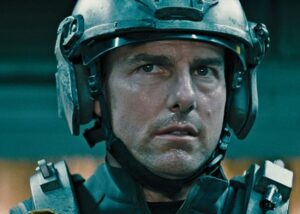 What’s in a name, right? If a movie has a lame title, who cares, as long as it’s a good movie. Same with a great title being unable to make a bad movie any better, it just gives a dungheap a better name.

So the Edge of Tomorrow, the Tom Cruise flick based on the novel All You Need Is Kill, came out to okay business and Emily Blunt is p.o’d because she felt the movie got short shrift. Blunt is especially unhappy about the title, and when you think about it, it sounds like a soap opera, not a sci-fi thriller.

Blunt wanted the original title, All You Need is Kill because “it was more ironic and totally more than a movie, you know?” Blunt also says she meets a lot of fans who loved the film, so maybe it will become a hit in the cult-o-sphere some day.

BTW, a friend of mine pointed out something interesting about Tomorrow. In his view, it’s a video game movie, because even though it’s not based on a game, it has the concept of one. You die over and over again until you get smarter, then you come back stronger. Collider also agrees that this is essentially a video game movie, but if you want to still consider it a sci-fi Groundhog Day, that’s fine too.