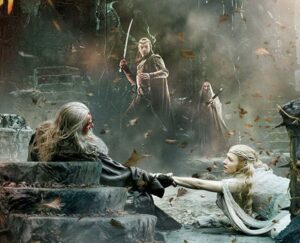 There’s two things that are certain in life, death and taxes of course, and for many years another certainly would be that Pink Floyd’s Dark Side of the Moon would still be on the charts. It’s also certain that the last installment of The Hobbit would make a big pile of money, and that Game of Thrones would still be the top pirated show.

The Hobbit, having opened early on December 17, giving it two extra days to rake in more money, has now hit $400 million overseas, according to Variety, making $573.2 million world-wide, and close to $170 million in the States, which is pretty nice for ten days, making it the #1 movie for a second week, beating out newcomers Unbroken, Into the Woods, and of course, The Interview.

And of course, Game of Thrones is, according to torrentfreak, the most pirated show of 2014 with over eight million downloads. The Walking Dead is #2, and it doesn’t even close with 4.8 million downloads followed by The Big Bang Theory with 3.9 million, How I Met Your Mother with 3.5 million, and rounding out the top five is Gotham with 3.2 million.

A Tribute to the Director of Colossus and The Taking of Pelham 1, 2, 3