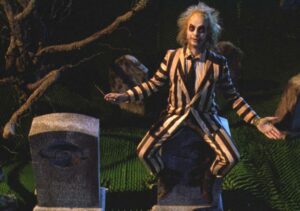 Tim Burton is having a big comeback right now with Big Eyes, the biopic written by Larry Karaszewski and Scott Alexander, the same screenwriting team behind Burton’s masterpiece Ed Wood. So with Burton coming back with a new movie, and Michael Keaton coming back with Birdman, how about that Beetlejuice sequel?

There’s been talk of a Beetlejuice sequel pretty much since the first one came out and was a hit, and now Burton told Esquire he’s “very excited” at the prospect of another ‘Juice movie. He added, “There’s a script now…I wouldn’t call it so much a sequel, but it’ll have some characters. It’s a bit too early to say but it’s definitely something on my radar and something I’d love to do.”

The script for Beetlejuice 2 was written by Seth Grahame-Smith, who also gave us Abraham Lincoln Vampire Hunter, and Michael Keaton told Variety, “I always said that’s the one thing I’d like to do again, but it kind of required Tim to be involved some way or another…if he’s in, it’s going to be hard not to be in.”

Thankfully Burton won’t do it with another actor. “There’s only one Beetlejuice, and that’s Michael,” he told IGN. “I miss that character.”

We miss Beetlejuice too, and indeed hope that Burton and Keaton can give us one more go round with the character.

The Interview Will Finally Hit Theaters on Xmas