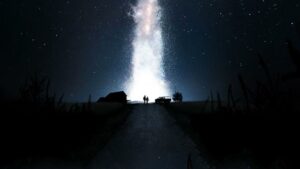 One of the perks of being a member of the Motion Picture Academy are screeners, which go out to everybody before the Oscars. Except there apparently won’t be DVD / BluRay screeners for Interstellar just yet, because Nolan wants voters to see it on the big screen.

Granted, there are movies that absolutely should be seen in a theatrical environment, Interstellar’s definitely one of them, yet as Steve Pond at the Wrap tells us, most movies up for Academy Awards have already sent out screeners before Thanksgiving.

This report tells us that Academy voters don’t need to pay to see the movie in theaters, and as we all know, director Christopher Nolan is doing everything he can to keep the theatrical experience alive, including keeping celluloid in business.

Nolan told The Wrap, “I think it’s much better to have people see it on a big screen [than a screener]. That’s my theory, anyway…I’ve only just started doing the video master. And the way my process works, it would be a bit counter-intuitive to be inviting people to watch it at home when it’s in the theaters.”

Then again, it’s going to be out for home viewing sooner or later, and people in Hollywood have screening rooms too, so they could recreate the theatrical experience to a certain degree. Not sure if this will hurt Nolan’s Oscar chances, but as we know, the Academy usually gives genre movies short shrift, and like Interstellar’s most obvious influence, 2001, it may take some time for the final verdict on the movie comes in from audiences and critics. (Reviews for Interstellar have been all over the map, much like 2001 when it first came out.)

Will The Stand Be Four Movies?