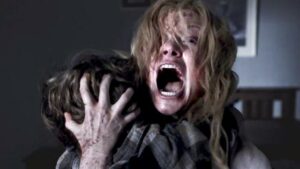 If you’re an old school horror fan like me, you’ve probably given up on there ever being an original fright flick again. We figured the remake conveyor belt would just keep rolling and rolling, and the days when something really cool would come along that would revitalize the genre, like Nightmare on Elm Street, were over.

Which is why I’m really excited to learn about The Babadook. It’s been getting rave reviews, and a friend of mine who’s seen it loved it to death, confirming that there is indeed something behind the hype. It’s a film from Australia, directed by Jennifer Kent, and it’s apparently about an evil pop up book, but it’s far more than that.

From what people have told me, Babadook is more about psychological scares than jumping out the closet and scaring the audience with cheap thrills. The basic idea is simple, but the psychological complexity is what makes it a great movie, or so I’ve been told from people who’ve seen it, and from the reviews I’ve read so far.

So is The Babadook the big kick in the ass the horror genre needs to regenerate itself? All I can say is I’m looking forward to seeing it and finding out for myself.