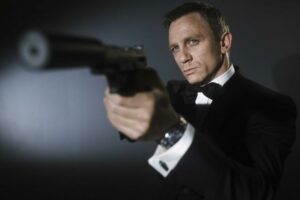 The writing’s been on the wall for quite some time now…celluloid is done, and only the richest filmmakers will be able to keep making movies with it. There’s still guys that won’t give up the joys of 70mm like Christopher Nolan, Quentin Tarantino, and Paul Thomas Anderson, and now reports tell us the next James Bond movie will be shot on film as well.

Collider reports that famed cinematographer Roger Deakins (Shawshank Redemption) has been working in digital these days, but the new Bond will have a new cinematographer who loves film, and Bond will go back to it for the 24th installment, where Christoph Waltz may be playing the villain. (The next Bond film has a November 6, 2015 release date.)

Let’s not forget that the next Star Wars movie was also shot on film, and the upcoming reboot of the Twin Peaks series will be shot on celluloid too. (If I’ve heard correctly, supposedly there’s a lot of television that’s shot on film these days.)

These days, even if you shoot a movie on film, it will still be projected digitally, and the days of actual film prints are a thing of the past. Still, it’s good to see that there’s filmmakers who still want to work with it, and who will make sure that celluloid goes out with a roar.