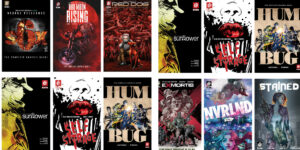 The festive, vibrant New York Comic-Con is a top-ranking pop-culture experience that, over the years, has morphed into a phenomenal event where passionate, all-in, aficionado-level fans of graphic novels, films, and TV converge to pay tribute to and snap selfies with the biggest stars and celebrities in the industry. The fans (and media) in attendance at the NYCC, which is completely sold out, are there to be among the “first knowers” of all the news and gossip abuzz going on at the Jacob Javits Center now and throughout this weekend. Scoring a personal, autographed photo with the likes of Peter Capaldi, Felicity Jones, Ricky Whittle, or Michael Rooker is a rather impressive walkaway gift as well.

The yearly event also is a news hub where some of the biggest industry news is introduced at the forum that is all ears for it. Michael Bay, the renowned film and TV director, producer, and writer, is also a cofounder of the 451 Media Group, a multi-platform entertainment company that is among the firms that are taking advantage of the NYCC environment and using it as a broadcasting station of sorts.

At a press conference held during the NYCC, the 451 Media Group announced it will exclusively premiere nine graphic novels created by some of the most-sought film and TV writers. These nine works combine bleeding-edge digital technology with content from some of the Hollywood’s top creative minds, such as the acclaimed author and screenwriter George Pelecanos, whose credits include HBO’s The Deuce, The Wire, and The Pacific, and Rob Cohen, the writer of The Fast and The Furious and the soon-to-be-released film, Hurricane Heist. S6x and Red Dog are the contributions of Pelecanos and Cohen, respectively.

According to Cohen Red Dog is a sci-fi adventure that follows Kyle, the only child on a distant planet, and his robot dog, Red. When Red goes missing in the savage alien landscape, Kyle goes in search of his friend, facing dangers beyond imagination and proving that no matter how far in space you go, there is no greater bond than the one between a boy and his dog.

“Red Dog is my passion project, and if I can make it into a movie someday, I will die a happy man,” said Mr. Cohen. ”But more important than that, it has found its form as a graphic novel thanks to the brilliant folks at 451, and a day does not start [without me looking] at a copy of the first issue framed on my wall and smiling.”

“S6X is very visual and character-driven,” said George Pelecanos. “These are very young men and women, and they look like everyday people. That’s something that I wanted to write about because I think it’s very real, and also, [it is] very important. To me, the graphic novel was the perfect vehicle to take the plunge and dive into the world of sequential art. And it’s something that I have wanted to do for a really long time.”

These projects were embraced enthusiastically by both men as well as other highly regarded members of the entertainment industry, such as Mr. Ashley Miller, screenwriter of X-Men First Class and Thor, who said, “What I love about the world George created is it’s both heightened and populated by real human beings. The characters are flawed, wounded, and emotionally tangible souls who just happen to be caught up in this operatic but deeply personal war story. S6X is more than just a shoot ‘em up — it’s about the things people are capable of at their very worst and their very best.”

Another story, Nvrlnd, is a graphic novel penned by the writing team of Stephanie Salyers and Dylan Mulik. The story is a dark tale that re-imagines Peter Pan on a set in a present-day Hollywood setting. Peter is a wallflower turned wild-child Wendy Darling befriends the fiery Tiger Lily and enters the rave scene of the underground club NVRLND. Intoxicated by music and pixie dust, Wendy falls for the enigmatic Peter, the lead singer of a band, The Lost Boys. You think you may know the truth about Nvrlnd, but the truth is, you know nothing.

The popularity of New York Comic-Con grows each year. Mark your calendar and join in on the fun and festivities next year.

The 3 Best Fashion Apps For Women On The Go

TOP Reasons Why Quality Web Hosting Can Be Incredibly Cheap