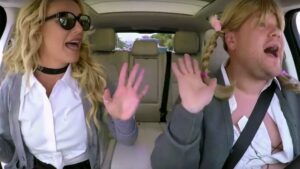 Guess who’s back from the dead? Britney Spears; yes, she’ alive! Just maybe not kicking.

Spears was James Corden’s latest guest on his show, Carpool Karaoke. Corden totally overpowered the pop star who rocked the early 2000’s with a range of rebellious songs. She mostly mumbled to the lyrics of her own song Womanizer.

On a personal front, Spears spoke unequivocally about her relationships and stated to Corden that she is done with men and marriage.

I think I might not ever go to men again…I’m done with men. I might french kiss someone, but I don’t believe in the whole thing about marriage anymore.

Also, if you were wondering what is it that Britney did again, in Oops I Did it Again, there’s no mystery because she doesn’t know what the song is about.

But one could pay to watch Corden singing to Hit Me Baby One More Time! Nothing against Britney Spears, but I never enjoyed her music as much as I did watching the above clip.