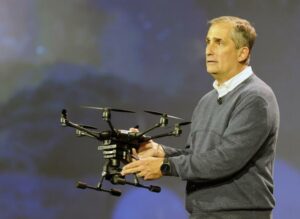 This week is the Intel Developers’ Forum and at the CEO keynote there is a ton of stuff to talk about from a car that drove on and off the stage by itself without running anyone over to the birth of Mixed Reality; Intel’s answer to Microsoft’s Hololens (which Microsoft is helping them with).  However, the most interesting part for me was on ever smarter drones.  I have two Drones one of the first Parrott drones and DJI drone that has far more capability and a 4K camera.  The problem with both is they tend to run into things and neither one has follow-me mode.  Now the problem with the early follow-me drones is they even ran into more things because few folks can do a sport and fly a drone at the same time and these things aren’t cheap costing typically between $1K and $2K.

Well Intel has a fix they have a platform, their Aero Platform for UAVs, which they are bringing to market and they showcased 3 drones.  That developer platform costs $399 and they only priced one of the Drones the Yuneec Typhoon with Intel’s Real Sense Camera at $1,800 with built in intelligence, retractable landing gear, and a 360 degree 4K camera.   (Yes I had to buy one and I’ll post a review of it once it shows up).  This was important because the earlier version of this Drone without the camera had a nasty habit of running into things catastrophically (as in dead Drone).

Let’s talk about the birth of intelligent, Intel Inside, drones this week.

The Problems With Dumb Drones

Initially drones were nearly as painful to fly as remote control helicopters which means you’d spend a ton of money on one and end up with a YouTube video of your inability to fly it.  They got easier as builders built in sensors so they could land themselves and hover in place.   But that was with fixed cameras once we added cameras with Gimbals the result was an inability to both fly the drone and adjust the camera so that the higher end products often required two people, a pilot and then a photographer.

Then they increased the ranges and the drones had a nasty habit of flying away.  There is nothing like seeing your $1K + toy suddenly deciding to see if it can fly to Hawaii to put the fear of god in you and have you chasing after it off road in a car not designed to go off road.  Not that I’d ever do that.

Most recently we all wanted “follow-me” features.  This was great as the Drone would automatically follow you as you rode or skied or drove.  Only issue was the damn things are pretty much blind which means if you go under a tree, bridge, or other obstacle you end up with Drone parts.

Finally, there are now a ton of regulations which include altitude limits and areas you can’t fly near.   For instance, flying over a well-traveled road, over 400 feet, or anywhere airplanes are in the air can result in an impressive fine but keeping track of all of this stuff is pretty daunting.

This new class of Smart Drones are even easier to fly, they keep track of where you are and if they lose the signal come back to you (rather than fly to the hills), and have some form of collision avoidance so they don’t fly into things.  This latest Real Sense version actually can see but doesn’t yet have the power on board to identify what it sees.

This means they can not only follow you but not end up in parts if you forget to watch for bridges and trees as they’ll navigate around them.   In addition, they can be programed with the legal limits and as long as their programing stays up to date the Drone will at least alert you if it is about to do something illegal.

It is interesting to note that Typhoon from Yuneec, when it first came out, was downgraded because it uses ultrasonic sensors instead of a camera against its primary competition the DJI Phantom 4.  The Real Sense camera should more than correct that disadvantage with the Typhoon.  Apparently it has taken a while for Drone makers to figure out that flying while seeing is an important feature.

However, these Drones are all over the map at the moment with huge differences in features and capabilities which, coupled with concerns about new regulations, are likely keeping Drone sales lower than they otherwise could be.  This is something Intel can fix.

Wrapping Up:  The Future – Drones With Intel Inside

This is just the beginning of this trend to make Drone’s smarter and Intel just entered the game.  This initial Typhoon with Real Sense is just their first limited effort and it isn’t nearly as well integrated as it eventually will be.  Intel should both reduce the cost of advanced features over time and add intelligence more quickly.  This means that we should get both a significant boost in capabilities and far more affordably high end drones over time.   In addition, we should also get more commonality in basic features.

Intel is serious about Drones and this goes to the top as Brian Krzanich, their CEO, is a huge drone fan and sits on the FAA advisory panel on Drones.  This means they’ll work to make drones that keep their CEO happy and likely means one hell of an incentive to get them right.  You next (or first) Drone may have Intel inside and that could be a really good thing.