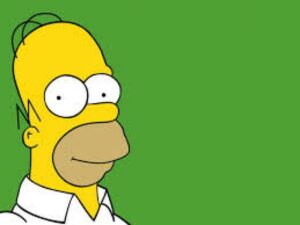 Simpsons fans everywhere must have been going nuts when it was announced that the entire show, all 552 episodes, would play in a massive twelve day marathon on the FXX Network. I love the show as much as anybody else, but who would watch anything for twelve days straight?

Well, a bunch of die-hard Simpsons nuts, that’s who, because the marathon has gotten very strong ratings, and there was also a big celebration of Matt Groening’s greatest creation at the Hollywood Bowl in L.A. One of the guests who performed was Conan O’Brien, who was a producer on the show and who also wrote the classic “Marge Vs the Monorail” episode.

The Simpsons always had hilarious music, and the L.A. event was dubbed “The Simpsons Take the Bowl,” celebrating the show’s twenty-fifth anniversary. Yes, that’s a number that makes many of us feel older, I can still recall the show’s debut back in 1989, as well as the Simpsons segments on The Tracey Ullman show, but it’s wonderful to see that Homer, Marge, Bart, Lisa, Maggie and the gang are all still here after all this time.

A Revamped GTA V Is Coming This November

A Revamped GTA V is Coming This November