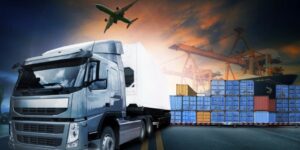 Though much of the hype and excitement surrounding blockchain technology has referred to the volatile, high risk/high reward, nature of bitcoin, there is a lot to be said about the potential long term implications of leveraging decentralized systems to better organize the world’s information.

Blockchain is so much more than just a tool to create new digital currencies. If applied appropriately, blockchains can be used to track ownership, manage trust, and optimize the way different sectors operate.

Prime industries for disruption are the ones still lagging years behind in technological and operational efficiency. These are the ugly, yet extremely valuable, industries that entrepreneurs have shied away from for years out of a fear for having to deal with regulators and intimidating incumbents. These spaces are plagued by dozens of intermediary services and restrictive regulations that drive up the cost of doing business.

The world of freight is an excellent example of this. Though it is not the prettiest industry, it is a critical component of the international supply chain that so much of the world now depends on for nearly everything. The multi-trillion dollar industry accounts for roughly 10% of the United States’ GDP and carries over 50+ billion metric tons of goods across oceans each and every year.

The problem, however, is that the shipping and logistics industry has not seen a facelift in decades. Many of the players in the space are still operating on equipment and low level software that was built pre-modern internet. To compensate for the inefficient and fragile systems of management, there are numerous (and expensive) intermediary parties that act as “middlemen” throughout the shipping process.

To complete a shipment from one part of the world to the other, as is often the case, you have to go through a combination of regulators, handlers, and shippers. Not to mention the hefty insurance fees that protects you against the $30 billion in annual cargo theft losses. As someone ordering a shipment, you rely on numerous independent parties – shippers, brokers, carriers, and drivers – who are responsible for moving your good from one place to the next. Without a clear view into where your order can be at any given time, you often just have to hope that everyone is doing their job correctly. Needless to say, the industry’s tiny nuances and complexities make the entire process extremely complicated, leaving tons of room for human error, fraud, and system abuse.

The good news is that most of if not all of the high priority problem areas in the logistics world are entirely solvable with innovative implementations of blockchain technology. We can radically improve the industry by cutting out middlemen, optimizing verification, and decentralizing the marketplace of shippers and buyers.

ShipChain is a hot blockchain startup that is doing just that by implementing an Ethereum smart contract to orchestrate a “shipping escrow” on top of a decentralized, distributed ledger. When a shipment order is placed on the platform, a contract is automatically created that details all of the important shipping information (beginning address, final delivery point, carriers involved, number of items, weight, dimensions, etc.) from the transaction. This data cannot be manipulated or edited by any individual in the network without group consent. The data itself is stored and encrypted in a sidechain for more specific, point-by-point and piecewise tracking, essentially acting as a more detailed Bill of Lading. Upon delivery and confirmation, the contract will be completed and recorded on the main blockchain, releasing any payment escrows in place.

Effectively, ShipChain is using a blockchain system of organization to remove the need for expensive freight brokers. Currently, broker fees are one of the most expensive components in the cost of shipping an item, as they not only take a percentage commission from the order, but also are prone to cause unwanted delays and make many human errors. Rather than depend on an agent, carriers will be able to go onto the open ShipChain platform and filter shipments that best match their needs. From there, they can intelligently route their team based off of specifications from the delivery.

What is most critical and impressive about the platform is that it is able to bring accountability to the entire shipping process – from the time an item leaves the factory to the moment it reaches the consumer’s doorstep. Permissioning, immutability, and encryption are inherent benefits found in any blockchain system that allows administrators to control who has access to certain, critical data. But the decentralized nature of the platform also means that no one will have the ability to change or delete existing data. In other words, the platform can bring clarity without compromising asset security.

While ShipChain is seemingly destined to completely disrupt the shipping industry, we know that blockchain will inevitably find its way into each and every muggy industry that is still running today. The question is…which is next?

The Importance of Strong Relationships With Vendors