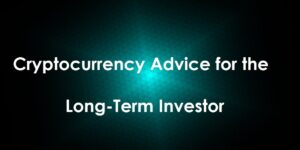 If you are a short-term investor, reading a couple of news, following the market, buying and selling during price peaks, you haven’t got much to worry about. But for those who want to follow the cryptocurrency ecosystem into the future, there’s more to the market than just reading the news or following latest trends.

If you want to undertake a long-term cryptocurrency investment, here are some tips to help you understand the market, analyze the news by yourself, make meaning out of the hypes, and go for the best cryptocurrencies for maximum benefits. Let’s get started.

So the truth is that a lot of us just look at the price and go in to buy. The market cap should inform your buying decision than just the price, or at least, both.

So let’s do a little mathematics here.

Take a cryptocurrency’s supply (the number in circulation) and multiply it by its current price, and you will get the total market capitalization of that cryptocurrency. And that is the value that matters far more than the price.

Another important thing is; the fact that a cryptocurrency has a higher price doesn’t make its market capitalization higher than another one with a lower price (a lot of exceptions are there though).

Here’s an example. Bitcoin Cash’s current price is a little above $1500. The price of Ethereum is just $471, far less than that of BCH. But Ethereum’s market capitalization, which is above $45 Billion is almost twice higher than BCH’s market cap, which stands a little above $26 Billion. (data as at the time of writing).

What this means is that investing in Ethereum gives you a higher chance of survival in the future than Bitcoin Cash. The future increase in the price of a cryptocurrency highly depends on its market capitalization in relation to other currencies. So the price depends on the market cap, which is also linked to the supply of the cryptocurrency.

So it is good not to get yourself so wet just because of price increases.

Note, however, that cryptocurrency price increases are good, especially in the short-term. But for long-term investors, the price is good and market capitalization is best when making your final decision.

Don’t run into selling your coins when prices increase

You buy a particular cryptocurrency today and the next day its price skyrockets 100X. If you are a normal investor, all that you’ll think about is to sell. But as a big time and long-term investor, your ultimate goal is to make more and that means you have to identify certain cryptocurrencies that have a longer lifespan even if they fall today – they are bound to rise again.

When bitcoin moved from a little above $1000 to $4,500, many bitcoin holders quickly decided to sell their coins with one mindset: the cryptocurrency is coming to an end. But bitcoin didn’t stop, those who moved with their coins now have over $9000 for just a single bitcoin.

That is what you get when you don’t look at an investment with a ‘one-month’ eye, but speculates into the future. Many cryptocurrencies have fallen and risen again to become some of the highest now. Ethereum, Bitcoin Cash, and many others that provide value more than just acting as ‘coins’ have proved to be in this category.

Some cryptocurrencies will fall completely, but you should make your own analysis and know what to dump and what to invest more in.

Diversification doesn’t matter if it’s not worth it

A lot of investors in the cryptocurrency ecosystem just diversify because of diversification sake. They just follow the saying “don’t put all your eggs in one basket”. Well, when it comes to cryptocurrency investments, that second or third basket you are putting your eggs in could just be full of thorns. In that case, you end up breaking all the eggs without realizing it.

If you are a long-term cryptocurrency investor or even a short-term investor, you should only diversify based on certain parameters, including the utility of the cryptocurrency in question, the current price, and most importantly, the market capitalization. If these tenets convince you that the future isn’t going to be any better, don’t just put your money somewhere because of some ‘traditional’ investment advice or quote.

Eggs are perishable so are investments. You should be careful where you put them rather than just spreading them anyhow.

A lot of cryptocurrencies will die

I personally consider cryptocurrencies like Bitcoin, Ethereum, Litecoin, Monero, and NEO, as well as a few others as being the ‘real’ cryptocurrencies. Not because of their market cap or prices, but because of the various purposes – like bitcoin for peer-to-peer (though other altcoins have done it better, is not easy to ignore its market cap, popularity, notability, and anonymity), Monero for its well-known CryptoNote protocol and its decentralization and scalability prowess etc. This kind of cryptocurrencies, as well as others in the same vein, solve certain problems even though most of them might have their mother algorithm coming from the bitcoin blockchain.

Their special purpose nature gives them the upper hand when it comes to long-term survival. That’s because they are not just coins, they also offer certain advantages as mentioned above. Other cryptocurrencies just build on the bitcoin blockchain and produce coins that do nothing apart from just acting as coins or trading materials. If you are an investor in the ecosystem, you will know these kinds of cyber coins already. Such digital currencies might last for just a few months or years.

But for those that provide better solutions beyond acting as coins and trading platforms, their long-term survival is guaranteed. Some examples of such cryptocurrencies include Monero, Ethereum, Bitcoin, NEO, etc.

Cryptocurrencies are here to stay. Most of them will also die. The survivors are those that can discern the market and know which ones are going down the drain and which ones are making it to the future. This investment prowess lies in an investor’s ability to face the truth about the ecosystem, read and analyze news, research a bit into each cryptocurrency that one is interested in, and make the right choice.

Robotics:  Is NVIDIA The Only Tech Firm That Truly Thinks Strategically?