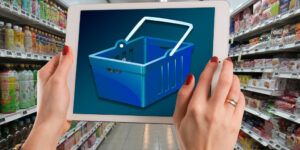 Today more than ever, innovative technologies and trends have emerged that just decades ago existed only in our imagination. Among these trends, the rapid growth of eCommerce can be considered an impressive achievement, but when compared with some of the technical advancements made in other industries, retail falls noticeably behind. In a time when cars drive autonomously, artificial organs are created in labs and black holes recorded live, is the ability to buy something online all that remarkable? Not exactly. On the low rungs of the retail ladder, namely with ‘mom and pop’ shops and local brick and mortar stores, progress is even more stagnant.

Many stores might point to a simple Google Maps listing when asked about their integration of technology, and little else. Even with improved systems for payment processing, management, and inventory that have been developed by retail innovators, the trickle-down presence of these tools is almost nonexistent. Small businesses haven’t overwhelmingly adopted the Point of Sale scanners, real-time inventory tracking software or RFID tags common to their larger peers, because they don’t have the means to use them as intended.

However, blockchain technology is quickly changing the status quo. The smallest fish in the vast ocean of retail will enjoy low barriers to entry into blockchain, and thanks to its distributed nature, can benefit from increased functionality without putting the business at risk. Those who participate in the new retail frameworks being built on blockchain will enjoy enhanced relationships with their customers, lower overheads, and safer business practices, but the battle to develop and onboard these services is still being fought uphill.

Though the retail industry has evolved in leaps and bounds from its early days, especially considering that the idea of retail commerce is so ancient, it largely plateaued after the convenience ushered in by the internet. Rapid digitization of the processes close to retail’s heart like supply chain management have helped bring it into the 21st century, but the internet cannot promote transparency or consensus like blockchain does.

Shippers and carriers now use mobile devices and Wi-Fi to quickly record inventory and pallet counts, for example, but when handing over custody of the merchandise to another entity the work just begins anew. There is more input that is required—additional human labor necessary to synchronize the two companies’ different systems, workers to double check questionable entries on the manifest, and more.

Low access to this admittedly limited information makes it nearly impossible for a smaller retail business to develop dynamic pricing models for its products, meaning that they must inflate their margins at the customer’s expense. Technology that retail conglomerates use to encourage customer participation is also conspicuously missing from the arsenal of smaller stores. This is unfortunate because driving online participation in local businesses is one of the best ways that tiny operations can fight back against larger, more technified competitors. Just as solutions like Yojee can bring standardization and low-touch accuracy to the supply chains mentioned above, blockchain can also boost those businesses who find that traditional rewards and loyalty programs don’t help them much. Even tools like Groupon, which employ data technology to aid local businesses in bringing customers from the online realm, are so opaque that campaigns often detract from their partners’ coffers instead of adding to them.

How Does Blockchain Fit In?

Where hi-tech industries like big data survive by way of their information asymmetry, blockchain redistributes profits, yet also responsibility to all stakeholders in any value chain. Centralized systems make it easy to capture and sell data from others, but any service hosted in a decentralized environment is naturally resistant to such a concept. Retail can make use of this idea more so than most industries due to the frequency of and emphasis on ad-targeting efforts within the most successful companies. Blockchain makes accessing and using this data easier, yet simultaneously voluntary, helping retail leaders like HotNow to provide a more effective and equitable solution to the gaps left by Groupon.

This blockchain-based platform has created a tokenized environment that rewards users for participating in the market, and merchants for offering loyalty and incentives to their biggest advocates in this new system. Using location-based data volunteered by blockchain users, HotNow allows merchants to place value-added ‘missions’ in front of their relevant audience and reward them with tokens for completing a mini-game, posting on social media about a new menu item, writing a review, or checking in at the store. These customers will be able to spend their HoToKeN at the business itself, creating a much more actionable, results-driven ecosystem for nurturing online-to-offline B2C relationships. Instead of merely padding the bottom line by streamlining operations, the platform is more used to motivate contributory customer behavior and generate revenue.

Other applications are focusing on different aspects of the retail experience. TenX, a startup from Singapore, has created a way to connect cryptocurrency wallets to Visa wallets, allowing users to pay with digital coins via their visa card. This could also expand cryptocurrency adoption among users as they can more easily spend them in the real world. Others such as BitPay have focused on integrating cryptocurrency payments into point of sales systems, helping the supply side be better prepared to accept cryptocurrencies, and expediting the embrace of blockchain even further.

Whether one-off purchasers or brand-loyal community advocates, one of blockchain’s biggest opportunities in retail is incentivizing valuable customer action. The limits that fiat money and centralization place upon rewards programs can simply be ignored when using cryptocurrency, due to the way they can be customized and manipulated in creative ways via smart contracts. Despite what might come off as a complicated subject, people need only to understand that blockchain will make their roles as customers less rote, and much more varied and lucrative. Nevertheless, critical mass has not yet been reached, and many are still unaware that the status quo is threatened. It remains the responsibility of startups to shoulder the burden of proof for blockchain, but progress is encouraging so far.

How to Intelligently Navigate the World of Cryptocurrencies

The Best Tips and Tricks for the iPhone 7