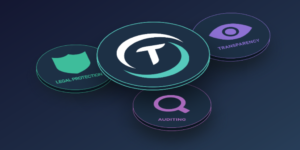 Stablecoins have been a prominent idea in the cryptocurrency space for the last few years. The massive price fluctuations in crypto can be traced to the fact that short-term constraints of supply and demand can lead to people bidding prices up or down. These fluctuations often occur after prices deviate too sharply from the true value. A stablecoin utilizes some form of regulatory body to help reduce variance and keep real prices aligned with long-term true prices.

The U.S. dollar is an example of a stablecoin that utilizes the Federal Reserve to maintain a certain amount of collateral. The system prevents bank runs and adjusts interest rates in order to regulate the money supply. These financial services help keep the dollar’s value roughly stable and do not allow bull markets to drive massive inflation. A similar decentralized concept can be implemented with cryptocurrency to help limit price surges and make prices dependent on real value instead of irrational exuberance.

Tether was one of the most prominent stablecoins in 2018, but it faltered due to bad practices. Tether is not trusted in the industry because for a time they stopped allowing withdrawals, ceased reporting clear audits of assets and have occasionally failed to maintain enough collateral. Simply put, stablecoins are only successful in the long term if they can maintain a strong level of trust as a regulated asset.

TrueCoin has developed an incredible product based on transparency and true value. They conduct extensive audits once a month so investors know that all investments are backed 100 percent by USD. Investors also have a series of enforceable rights that allow for more security in a traditionally volatile industry. Furthermore, they have a wide range of partnerships, including legal collaboration with Cooley and WilmerHale, fiduciary relationships with a number of banks, and investments from Founders Fund Angel, Stanford’s StartX and Blocktower Capital.

Stablecoins only work as long as there is real collateral backing the currency. Some stablecoins have used a cryptocurrency as collateral, while others have smaller requirements regarding amount of collateral. In either case, a large crash can lead to a bank run if there is not enough currency to back the system. So it is crucial for investors to be able to have access to audits of resources to know everything is being executed properly. This is something TrueCoin has placed at the core of its foundation.

Additionally, it appears likely that governments will increase regulation of cryptocurrencies, which means most ICOs and live tokens will need to become more transparent when communicating with the public. TrueCoin serves as an example of what beneficial regulations can be made that actually help the decentralized nature of cryptocurrencies.

The most promising part of stablecoin technology is the fact that it can keep prices better aligned with real value. For instance, a number of pump-and-dump schemes have occurred recently in which prices are artificially inflated for a short time. This highlights the problem of leaving crypto prices up to market drivers. Ultimately, the prices of valuable cryptocurrencies do require rapid price appreciation, but they need to occur in line with the growth and development of the technologies, not speculation.

Stablecoins, in theory, allow prices to be more or less tied to the real value of the currency and not undergo the tremendous fluctuations that characterize the current crypto market. TrueCoin is the most effective stablecoin implementation so far, and is poised to be a major mover in 2018. While only time will prove the effectiveness of their technology, the maturity with which they are approaching this problem and the quality of the partnerships they have secured are positive indicators of long-term performance.

Does Two Way Radio Have a Future As a Consumer Gadget?