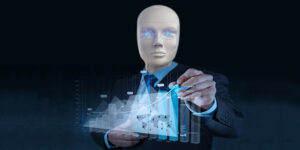 The rapid rise of artificial intelligence across a number of important industries has given many otherwise brilliant analysts and investors plenty of tunnel vision. AI and intelligent machines are the entirety of our future, we’re led to believe, and no other nascent technology is worth nearly as much time, attention, or investment as clever robots. In reality, however, a number of other leading technological developments shouldn’t be ignored because of AI’s rise – indeed, some like Blockchain are proving to be a match made in heaven for AI.

Here’s why blockchain and AI are the perfect match for delivering innovative solutions to numerous business and social issues.

What is blockchain, anyway?

Most people have a relatively accurate understanding of artificial intelligence – after all, AI has lingered in the public consciousness in some form or another for decades now, with Hollywood movies and cartoons like “The Jetsons” having promised to deliver autonomous robot butlers for countless generations. While the public has some accurate conception of AI – or the practice of creating machines capable of carrying out intelligence-demanding tasks on their own – fewer people have any idea what blockchain is.

Most simply, blockchain is a decentralized ledger technology that stores encrypted data in such a way that every party involved in an economic transaction can trust and rely upon that information to be accurate and timely. AI and blockchain are both very complex – to give either of them a one-sentence definition is sort of similar to defining your smartphone as a device that “can make calls and access the internet,” in that it’s true but not exactly comprehensive. Nevertheless, there are ways to keep our imagining or blockchain and AI simple while we explore the ways they’re a perfect match.

Blockchain, as used in bitcoin, is already being used to generate decentralized AI that are less risky to use, for instance. AI systems which are dependent upon a single central authority are usually only available to massive corporate enterprises with access to huge resources. This has led to a surge in interest in decentralized AI, which can only become a reality through blockchain, which will ensure a more democratized and manageable artificial intelligence in the business environment.

The primary reason that AI and blockchain are a perfect match is that AI programs need access to huge data troves in order to learn, but that data is often inaccessible to the masses. A number of companies have come forward in recent years to pioneer the democratization of AI data through blockchain services which aim to break the stranglehold that major corporate players enjoy over innovation in this area. As time goes on, the furthered democratization of AI data will increasingly be crucial towards its long-term development, as collaboration and working together rather than putting your data in a silo will become the new norm.

Predictive analytics are also one of the reasons that AI has grown so huge over the past few years; companies everywhere are investing huge sums of money into predictive operations that can determine market trends before they even occur. When it comes to organizing the immense databases that AI programs use to effortlessly predict the future, blockchain services could become increasingly relied upon as the volume and complexity of business information grows more unmanageable.

Companies like VIA and Coingenius are already leading the way when it comes to developing AI-specific blockchain services with an eye towards the future. A recent analysis of leading companies that are acting as blockchain/AI pioneers should serve as a stellar example of how businesses which combine these two nascent innovations with one another will drum up positive press for themselves. When companies of the future want to get noticed, they’ll likely view the natural pairing of artificial intelligence technology and blockchain services as an excellent way to get the attention of those with some tech-knowhow.

Don’t expect the AI revolution to abate anytime soon, but don’t think you should only be paying attention to clever machines, either. Blockchain services are increasingly proving themselves to be an instrumental part of the development of intelligent machines, and companies of the future will keep turning to this decentralized ledger technology as they try to churn out clever robots for a variety of purposes. Whether it’s a predictive analytics firm or a city infrastructure planner, there’s no telling who is combining blockchain and AI with the knowledge that these two technologies are a perfect match.