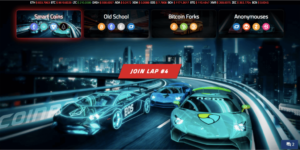 As the cryptocurrency market goes through turbulent times and the blockchain is disrupting many industries, including banks, financial systems, health, and governance, the gaming industry is moving fast in creating decentralized systems to change the way online games are played, how winnings are decided, and thus provide a level playing field for everybody.

The gaming industry, however, in the face of high growth in the blockchain technology and decentralized systems, still suffers a lot of problems. Most of the decentralized games that come up don’t live up to expectations. Whiles most of them have been whitepapers for so many months, others launch and then fail early because of improper implementation, not to talk about the lack of a good support team. To solve this problem, a new game that is designed from scratch, with the fully-functioning decentralized interface is here and it’s none other than CoinRace.

CoinRace is a decentralized racing game built and run on the Ethereum blockchain and powered by Smart Contracts that are developed through Solidity. The game gives players equal chances of winning, creating a level playing field for all. It’s a game that is also built from the beginning to work. It is not just an idea, it is not just a white paper, it is a working game that would invite game lovers and excite them with just the numerous choices that are available.

Unlike other decentralized games where players have to wait for so many months after testing the beta version, and then later not even seeing it, CoinRace is an existing game. Whether you are a gamer who wants to see a real racing game or an investor who wants to get involved in the next big thing, CoinRace offers you the opportunity to take action now.

The ‘Old School’ race features four cars. These cars are represented by Bitcoin, Ethereum, Litecoin, and Dash. Players can place their bets on all coins and wait for the race to end. The ‘Smart Coins’ section of the race contains Ethereum, Cardano, XEM, and, EOS. Each car in the race is made up of one cryptocurrency, giving players four different choices.

How would it feel if you are to be going back and forth from your game to an exchange platform just to check the current prices of cryptocurrencies, especially looking at the volatility in the market? Bad. Apart from giving you real-time prices of all the cryptocurrencies featured on CoinRace, the platform also makes sure that prices are constantly updated. To achieve this, CoinRace uses data from Bitfinex, Poloniex, Bittrex, OKEx, Kraken, Binance, and Cryptocompare, making sure that updates are handled through websockets.

Play the Game – but no one knows you

This is an anonymous playing field. Just as you undertake your cryptocurrency transactions without being represented in person, CoinRace gives you the same power. Well, why should your identity be revealed just by playing a game? After all, the cryptocurrency world is supposed to be ‘anonymous’. This is the only game that provides gamers that power – to play without prying eyes from government or authority – but of course, it’s no bad game. As a player, your ID is your Ethereum address and transaction history.

The Team (An Anonymous Group)

CoinRace is built by an anonymous group. If you need a game that produces nothing but the best and hides your identity as a player, then CoinRace nails it.

Apart from using the blockchain technology and leveraging Ethereum ERC20 tokens to build a robust game like CoinRace, the team has bigger ambitions to implement in the coming months. CoinRace is poised to become the fastest game in the blockchain world. The team will use the Raiden Network to ensure scalability, fast, and simple gaming and transaction processing in the future.

Through a CoinRace decentralized application, the team will later give gamers a peer-to-peer system where tokens can be transferred from one gamer to the other, seamlessly and cheaply. The team will also ensure the development of a killer user interface that gives more power and choice to gamers, allowing them to choose their own lap durations, their prize calculations, and the list of cars or tokens in the coming months.

The team is also poised to introduce the Race token to popular and robust decentralized exchanges through Ethereum and ultimately offer a developer-friendly interface where gamers can develop their own betting games, including weather, sports events, and many other betting games.

Why Passion Is The Key To Long-Term Business Success

How to Choose the Right Adjustable Bed [Buying Guide]