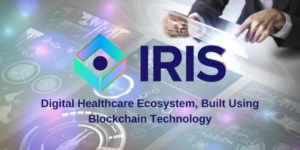 Iris, a blockchain tech aimed at revolutionizing the way providers and patients deal with health data is attempting to bring the miracle of blockchain technology to a sector that can be plagued by inefficiency and insecurity.

Healthcare in America has always been an economic drain, eating more and more with diminishing returns on quality and breadth of care. Much of the current political debate about health insurance is rooted in the seemingly incessant increase in medical expenses and the rising costs in care. This year the US will spend nearly 17% of its GDP on healthcare related expenses, a number only estimated to rise.

This spending is by far the highest among developed nations. This globally-disproportionate expense is the result of inefficiencies not only in how Americans pay and provide healthcare, but in the system itself. Improving the costs and economic efficiency of the healthcare industry could be one of the greatest political challenges facing America today.

The current technology of Existing Health Records (EHR’s), the system for storing and sharing medical data is fragmented, insecure, and inefficient. Traditional EHR’s are limited by the lack of interoperability between systems. That is, different systems can often have difficulty transmitting and receiving health histories when individuals switch providers. This prevents patients from receiving optimal care.

It also keeps doctors from comprehensive and accurate medical histories of their patients and forces healthcare workers to spend vital time inputting imperfect data across systems. These systems are also insecure, leaving some of the most valuable individual data imaginable vulnerable to attacks. Many current systems of EHR is insecure and open to breach from 3rd parties, including the the UK’s National Health Service (NHS) in 2017. Why shouldn’t the most personal data also be the most secure?

How Does Blockchain Help?

Blockchain technology has been revolutionizing industry after industry. Not only the Bitcoin of daily headlines, the revolutionary blockchain technology is beginning to be applied creatively across all sectors. This developing tech has the potential to make the world’s economy faster, safer, and better. Now, one group of entrepreneurs have their eyes set on the healthcare industry by attempting to replace the current system of EHR’s with their Iris Network.

The Iris blockchain network could make healthcare data secure, centralized, accountable, and accessible to those who need it most. The Ethereum network-based Iris blockchain network essentially works like any other blockchain technology, using cryptography to create a continually-growing list of digital records. These “blocks” of recorded information are then redistributed into networks spread across the system. Any authorized member of the system can the access the data with proper computational verification. The revolutionary aspect of Iris is to take this technology and apply it to record management, rather than the financial stores of value that is so popular on the news recently.

But this creative new approach truly is earth shattering for the medical industry. Incentivizing the uploading of data to the network by patients and authorized healthcare professionals, these uploaders of data, called “miners” are given an Iris token, similar to any other digital currency like Ripple or Bitcoin Cash.

Miners can then sell these Iris tokens to buyers like insurance providers, researchers, and other Big Data firms who can use these coins to purchase aggregated, anonymized healthcare data. Imagine medical histories as secure as any node on the Ethereum network, or two medical researchers sharing information to opposite sides of the world across the Lightning Network.

The Iris Ecosystem will truly benefit every member of the medical sector. The technology gives miners access to the most efficient and safe version of their healthcare records possible. It also brings down providers’ overhead from using inefficient forms of data storage. Ultimately, it could make the market for healthcare data a safer, more confidential place. Proper implementation of Iris could see healthcare providers and insurance companies saving billions of dollars, and doctors and researchers saving untold amount of lives.

The Next Step for Blockchain?

The Iris blockchain network is not only a revolution for the healthcare industry, but proof-of-use for blockchain making the world a happier, healthier, place to live. No longer limited to financial application, entrepreneurs like those at Iris are proving that this revolutionary technology can be used for the improvement of human-based industries. Iris shows that the efficiency and speed Blockchain can bring can improve our health and happiness.

Can blockchain technology continue to revolutionize industries that help people live and work healthier? Is the future of blockchain tech one that seeks to serve society? The people of the Iris Network certainly are making the case for blockchain as a positive good in the 21st Century.

How Can You Ensure the Best Maintenance of Your Mattress Topper?