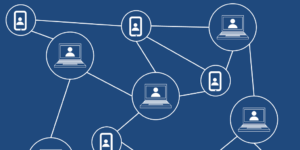 The greatest problem in blockchain is one that keeps growing; scalability. Blockchain is like a child running in an old pair of sneakers. As it grows the infrastructure gets smaller, and blockchains become slower.

In this case, it all comes down to time and data; the time it takes to reach consensus, and the time it takes to put information into a block. More traffic means more data, which means longer transaction times and potentially higher fees- since only so much data can fit inside a block. Blockchain is in the market for a new pair of shoes.

There have been proposed solutions such as increasing block sizes or the Lightning Network. While these solutions may solve scaling for P2P electronic cash currencies, it doesn’t help platforms like Ethereum which utilize a Proof of Stake algorithm. Different companies have tried to solve this problem. Some, like IOTA, do away with blockchain altogether in favor of the Tangle. Others have been looking toward more permanent solutions; companies like Dispatch.

Dispatch Labs offers a solution that is off the chain. According to the dispatch white paper:

Storing data off-chain is critical to the long-term scalability of the blockchain, as it allows the shared ledger to grow linearly while the actual data in the system can grow exponentially.

Dispatch hopes to create a blockchain that can work with large amounts of data without it slowing down the blockchain. They do this by implementing Artifacts. Artifacts are off-chain data referenced in the Dispatch blockchain. In the Dispatch White paper, they are described as:

An artifact is some set of data that is written, read, and updated as a single unit. An artifact could be a document, movie file, .csv file, VR assets, software program, a random hexadecimal string, a private key, organized database data, another Merkle tree, or almost anything else that can be organized into a replicable data structure.

The Dispatch blockchain is able to distribute information about the artifacts without sharing the artifacts themselves, making the problem of scalability a thing of the past. These artifacts are implemented by using Dispatch’s DVM (Dispatch Virtual Machine), a low-level language interpreter for executing smart contracts in the Dispatch system. It is modified from the Ethereum Virtual Machine in order to handle Dispatch’s artifact-specific operations.

The combination of artifacts and specialized smart contracts gives you DAN, the Dispatch Artifact Network.

The Dispatch infrastructure is based heavily on the storage, transmission, and manipulation of off- chain artifacts. The blockchain distributes information about the artifacts without sharing the artifacts themselves.

Existing solutions to the scalability problem, such as the Lightning Network or Raiden Network, can be easily configured to build on Dispatch’s blockchain by using artifacts. Also, the Dispatch smart contracts are not artifact specific; Dapps built using stateful data are still compatible with Dispatch’s network. This level of “outside of the block thinking” is the next step in blockchain technology. Dispatch’s Artifact Network takes into account that the world is not yet on a blockchain and opens up the technology to new possibilities for doing away with full-nodes.

While many blockchains are competing, the experts are well aware of the dangers of blockchains that can’t scale. Vitalik Buterin, founder of Ethereum, has said:

Scalability is this idea of coming up with a blockchain that can scale much larger than existing chains essentially by processing transactions in parallel. And moving away from this paradigm where every single node on the network has to process every single transaction.

Dispatch has done just this. The DAN opens up the possibility for partial-nodes to work together, using varying consensus methods in order to maintain the network without sacrificing security. For years, everyone has been looking for the solution to scalability, until recently every fix that has been presented is deemed ‘doomed-to-fail.’ Blockchain is going to be an integral part of almost every business within ten years and without the proper growth-oriented infrastructure, scalability will be the downfall even the most innovative projects. If Bitcoin was the first step in Blockchain, it has been walking for a decade in the same pair of shoes, growing the whole time.

From Farm to Truck to Table (Fr8 network and Founding Farmers)

Side Hustle Business Solutions You Should Know About