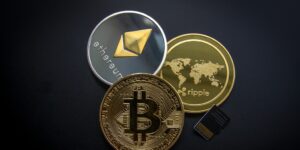 Early adopters are the biggest winners every time cryptocurrencies are mentioned. From Bitcoin to ripple, Monero to Ethereum, each cryptocurrency started from scratch. Anyone who purchased any successful coin today when it just launched has made profits. If you just got started, overwhelmed with so many coins to choose from, relax. Even the biggest coins can still make you profits, but not guaranteed.

How to make Money with Cryptos

The easiest way to make profits with cryptocurrencies is to trade them. Simply put, buy some bitcoins or ethereum and hold them for a while. When the prices increase to the desired margin, you sell them. Learn more about this concept on flyp.me.

Buying and holding top cryptocurrencies had the highest ROI in 2017. And we got numbers to show that.

One thing traders tend to forget when dealing with cryptocurrencies is that they invest in the underlying technology and not necessarily the coin. When you buy Bitcoins, you invest in the Bitcoin platform, its capabilities, and use cases throughout the world. Bitcoin in specific was the first decentralized cryptocurrency in the world. Its founder, Satoshi Nakamoto, designed it for the following reasons:

Perhaps because of being the first successful cryptocurrency, Bitcoin has continuously gained popularity year after year. Its adoption rate compared to the rest of cryptos is so huge that it commands 40% market dominance. Bitcoin is generally used as the base cryptocurrency for buying other coins. And despite having its flaws, it’s likely that the digital asset will continue dominating the market.

So, is it worth it to invest in Bitcoins? All signs show that Bitcoin will continue to dominate the markets years to come. Nearly all trading websites support Bitcoin and use it as the base currency for trading other coins. Cryptocurrency wallets tend to list Bitcoin and other coins. Throughout the e-commerce where cryptocurrencies are accepted, Bitcoin is mostly the crypto accepted. Even where a merchant claims to accept top altcoins, they always convert these coins into Bitcoins before receiving them.

There is confusion among traders as to whether it’s worth it to invest in Ethereum given the drastic fall of Ethereum prices in 2018. But like Bitcoin, Ethereum is founded on an excellent technology. Ethereum was designed in 2015 as a blockchain startup that could offer the coding tools needed to build other blockchains.

The network also consists of smart contracts: executable computer commands that help make payments in a trustless and conflict-free manner. Smart contracts are in fact one of the biggest inventions of the cryptocurrency industry. Through Ethereum’s platform, hundreds of blockchain startups have been born. In fact, a website that tracks the development of Ethereum decentralized apps shows that 1,367 apps have been developed on the platform since 2015.

Most of the decentralized applications held an ICO to raise funds. And with each ICO, Ethereum states that the startup must accept funds in Ethereum coins. This way, the Ethereum coin has gained lots of adoption over the years and is likely to continue gaining adoption in coming years. Once in a while, the coin will plummet due to market correction or other reasons, but it will always emerge strong.

Ideally, Ripple has a digital ledger similar to the blockchain but slightly different. Ripple primarily targets banks and other huge financial institutions. It helps the institutions to complete payments around the world fast and efficiently. There are 100 billion ripple coins mined and distributed by the parent company. The coins could be distributed even further, but ripple claims that no more coins will be distributed in the future.

Should you trade Ripple in 2018? Ever since the Ripple network began allowing banks to complete payments using Fiat currencies, traders started doubting Ripple’s profitability as a cryptocurrency. The argument was that the company only promotes their payment platform and not the coin.

While that is true, there is nothing that stops Ripple from growing in value. As a finite coin, ripple could still grow in 2018 and beyond. And if more institutions use the coin to complete payments, its value will rise hugely.

What are “Real” Businesses buying into and Why?