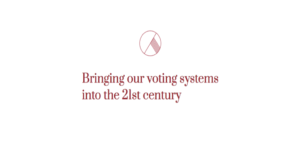 The electronic voting machine (EVM) was once seen as the savior to modern democracies. While paper ballots may have worked at a time when populations were in the hundreds of thousands rather than the millions, with voting populations also representing a smaller proportion of the total population, paper voting presented challenges to the modernization and growth of governments who demanded efficiency and accountability.

The days of Tammany Hall shaving off the mustaches of just-finished voters to fool registrars, or Lyndon B. Johnson’s infamous senate primary victory where dozens of “voters” submitted their ballots in alphabetical order one minute before polls closed, were supposed to be over. Electronic Voting Machines were technology’s answer to democracy’s challenges.

However, these EVM’s, once seen as objective talliers and arbiters of elections, have recently faced their own obsolescence. EVM’s are notoriously insecure and vulnerable to hacks. Even more dangerous, however, is the centralization of electronic voting data. Sent to centralized servers, aggregated voting data can be compromised and manipulated, swaying entire elections.

In this technologically-savvy age, democracies must move to utilize technology that protects free and fair elections. As recent elections around the world have shown, the threat to democracy posed by technology is real and comes with disastrous consequences.

This is where Agora’s blockchain technology may be able to help. Utilizing a custom blockchain infrastructure to enable a secure and efficient electronic means of recording votes, Agora can be used by any government that wishes to run a transparent election at a lower cost.

Reliable digital voting platforms, such as Agora, have the ability to incentivize greater voter participation in the countries they serve. Even in coordination with traditional EVM’s and paper ballots, Agora could save governments millions of dollars in the administration of elections.

Perhaps most interesting element of Agora’s blockchain voting system, however, is the ability to create secure voting on mobile phones. Utilizing its unique multi-layered blockchain infrastructure, Agora can tally and anonymize millions of votes, all while producing a real-time record for any voter or third party to audit. This could potentially have explosive effects on voter participation. Currently, there are many barriers to voting in-person. Besides long lines and wait times, which impact hourly employees from even attempting to vote, the elderly and disabled are also affected.

Blockchain can solve these issues, and its capabilities could have a revolutionary effect on democracy. New voters may enter into the democratic process. Voting patterns could change, too, expanding the voice that currently disenfranchised voters may have in the future. Agora could permanently alter voting habits and patterns for the better.

Positive trends in voting behaviors aside, one of Agora’s most obvious contributions to democracies could simply be in election security. A secure blockchain that allows for the audit and protection of ballot data is an important innovation. In countries where fraud and election manipulation depresses voter turnout, a more secure system could greatly increase public perception and participation in elections.

No longer bound by black box systems, elections may finally become transparent due to blockchain technology. Agora is a leader in this arena, offering the first end-to-end verifiable blockchain solution for elections.