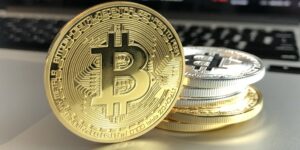 Anyone with any access to news in the past year or so is likely to have heard of the phenomenon that is Bitcoin. Digital coins – also known as cryptocurrencies – have swept the industry with their new approach to finance and Bitcoin is not only the coin at the forefront, but it was also the first. With this in mind, it’s undeniably important to understand just where Bitcoin came from, and what it’s been through in its lifespan of just under 10 years from the very first moment a BTC price was set, to the incredible highs of 2017. We’ve pulled together a brief history to get you started.

2008: Bitcoin – A Peer To Peer Electronic Cash System was published

In 2008, a mailing list discussion around the topic of cryptography was graced with the presence of an anonymous entity – Satoshi Nakamoto. They posted a paper called ‘Bitcoin – A Peer To Peer Electronic Cash System’ which discussed the possibility of a cash system that would allow the existence of transactions that didn’t need to pass through a financial institution.

2009: Bitcoin Software Is Made Available To The Public

Bitcoin’s software was first made available to the wider public in 2009. This meant that potential owners of the coin could begin mining Bitcoins; however, there were no transactions or trades made with the coins during this year.

2010: Bitcoin Is Given Its First Value

While mining had been going since the first introduction of Bitcoin, there had been no trades and as a result, there was no way to price the coin. However, on the 22nd May, someone bought two large Papa John’s pizzas for 10,000 bitcoins by trading them with someone who ordered the pizzas to his home. This set the worth of the Bitcoins and the rest, as they say, is history.

The price for Bitcoin began to rise over the years and reached $1,000 for 1 bitcoin for the first time in 2013. However, the price was declining soon after. It dropped as low as $300. Owners of Bitcoin didn’t see the cryptocurrency rise to $1,000 again for over two years.

Ethereum is one of what the industry calls ‘altcoins’. This term essentially covers all over coins that came after Bitcoin, as they are ‘alternatives.’ However, despite the thousands of cryptocurrencies on the market today, Ethereum has come the closest to Bitcoin’s success. Ethereum is actually a platform, and Ether is the cryptocurrency, and is used for the facilitation of smart contracts and other apps through the Blockchain. As a result, ICOs also came into play. Initial Coin Offerings offered investors the opportunity to trade stocks in start-ups using cryptocurrencies, and so of course, those interested started to pick up on this new cryptocurrency. However, Bitcoin still remained in the lead.

As Bitcoin’s popularity grew, so did the number of places in which you could spend the coins when you had them. As a result, more and more people were not only spending the Bitcoins they had, but were putting money into the industry through investments and as a result, it’s value skyrocketed. In November-December 2017 alone, the value went from $7,843.94 on November 16th, to an incredible $19,343 on December 16th!

Today, Bitcoin’s price is still fluctuating. After its high, it has fallen to $7618 at the time of writing, though it’s guaranteed to change. Its popularity is higher than ever, at least as far as the media is concerned and only the future will tell just what this cryptocurrency could do. What we do know, however, is that the Blockchain technology that powers Bitcoin is currently helping Fintech Start-Ups and banks alike improve upon their processes, and is already making incredible differences in the world of technology.

Ways to save money on any online purchase