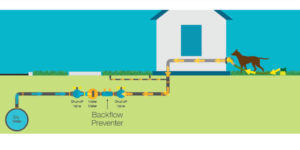 Nearly 70 % of the earth is covered in water, but only less than 3% of it is suitable for drinking. The worse thing is the fact that, humans can access only 1% of this drinkable water, since the rest is trapped as snow in glaciers.

According to the key facts published by World Health Organization, more than 2 billion people on this planet are drinking contaminated water. Drinking water polluted with dirt and microorganisms is putting them at a risk of water borne diseases like diarrhea, cholera, typhoid, polio and dysentery. Diarrhea alone causes 500,000 deaths per year.

An expert Chicago plumber at Mike’s Plumbing Chicago, stated that backflow of water is one of the major reasons for drinking water contamination. It majorly happens due to unwanted flow of water, rising as a result of cross connection, where used or non-potable water gets mixed into pure, treated and potable water distribution system. Homeowners can contact a 24 hour plumber in Chicago if such a situation arises.

“Backflow of water from residences into distribution systems is probably more widespread than currently thought and is thus a potential public health concern for the water industry. Analysis of data from backflow water-sensing meters has shown that backflow events occurred at a rate of 1.6% of residential services each month, with 5% of homes registering a backflow each year.”

In any kind of living condition, be it rural or urban, water distribution systems are designed in such a way that water should flow to the end user from the distribution system. However, in situations when water flow reverses from its original setting, water backflow is said to have happened.

Backflow in plumbing often results due to two conditions:

Back pressure happens when water is forced to flow in a direction opposite to its original course. In this case, water flows back from non-potable system containing acid, soap or antifreeze into the potable water system. This needs the intervention of an emergency plumbing service in Chicago immediately.

Back siphohange happens when the pressure in the water supply becomes less than that of the plumbing system. Such reduction in water pressure could happen during water main breaks or during firefighting.

Backflow in water supply and households should be prevented. Homeowners can install a backflow preventer in their houses for this. Drinking water contamination has to be avoided at all cost. Call a licensed 24 hour Chicago plumber for installation today.

Who can finalize my loan application with a bad credit score?