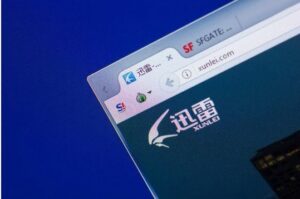 This week cloud giant Xunlei Limited announced its latest earnings for the second quarter of 2018. The company has been undergoing significant changes over the last few years, yielding positive financial results in the form of rising stock prices and year-on-year revenue increase. Key highlights include:

Some investors did question in the past whether Xunlei could adapt itself to the new tech world, especially when AI, big data and other emerging technology are on the rise. Well, it is now clear Xunlei’s CEO Lei Chen has a done an excellent job pivoting the company into a blockchain and cloud computing leader.

Xunlei’s business transformation initiative kicked off in 2014 with the appointment of Chen as its Chief Technology Officer, the company’s first official CTO in a decade. At that time, Xunlei’s download subscription service accounted for most revenues.

In July 2017, Chen took the helm as Xunlei’s official CEO. Chen’s first port of call as Xunlei’s newly appointed CEO was a dramatic but a natural shift in the company’s business model from distributed P2P technology to shared computing and blockchain. All these technologies share similar DNAs with features in decentralization and efficiency.

Benefiting from the successful transformation strategy, Xunlei’s cloud revenues grew to more than half of total revenues. As of June 2018, Xunlei’s shares were priced at US $12.95, a 282% increase from the previous year. The company has effectively made the transition to a cloud and blockchain company.

On top of strong financial performance, Xunlei’s significant strides in shared computing and blockchain technology have garnered notable industry accolades, including citation in a research paper by China’s Ministry of Industry and Information Technology, and Xinhua Net’s “Outstanding Entrepreneurship and Innovation Project”.

Without question, Xunlei’s future continues to expand around blockchain.

As Chen said, its ThunderChain platform and shared cloud computing will help bridge today’s divides between the emerging technology and real economy. The ThunderChain Open Platform has been seeing an increasing number of startups and developers adopt its infrastructure to create applications across various sectors. Xunlei is positioned as the first choice for Dapps, especially those that intend to reach a great number of users.

3 Jobs You Can Get with an Online Associates Degree