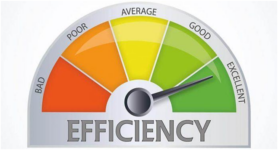 For many in the manufacturing industry “efficiency” is like the fabled rock that Sisyphus was forced to roll up the hill in Greek myth: as soon as it is achieved, the struggle starts all over again. This is because efficiency is a relative virtue. A production line never achieves efficiency — it can only become more (or less) efficient.

This is one of the reasons so much energy in manufacturing goes into trying to design production and assembly lines that are more efficient than those of the competition. A more efficient line is a more productive and therefore more profitable one, and given that success in the world of manufacturing often relies on having little more than a razor thin edge on one’s competitors, maximizing efficiency is a never-ending process. So what are some of the ways that contemporary industry leaders are approaching efficiency, and what are the tools they are using to do so?

This requires responsive, fast, and accurate quality control — in modern manufacturing, the best way to deliver all three is by using a coordinate measuring machine (CMM).

CMMs play an important role in the quality control process because they can quickly gather and analyse sophisticated data about newly produced parts and then compare that data against electronic blueprints to create an accurate and exact picture of the degree to which a new part matches blueprint specifications. But because CMMs gather so much data, they can also be used to extrapolate information about the overall functionality of the production line as a whole. Using the latest software from metrology providers like Canadian Measurement Metrology CMMS track small but progressive lapses in quality to predict future problems that may be due to machine error or degradation, which in turn allows production managers to avoid costly bottlenecks caused by broken machines or other unscheduled maintenance issues.

In a recent post on the Advanced Manufacturing Now blog, Allcona CEO Stefan Scherer noted that metrology is playing a leading role in driving forward new forms of automation and closed-loop manufacturing. In a world where efficiency is moving in ever-tightening circles, manufacturing businesses that want to stay competitive need to use every tool at their disposal to increase their speed, quality, and productivity.

Because of their ability to gather large amounts of complex data, CMMs are one of the most important weapons in the forward-thinking industrialist’s arsenal. However, it’s worth mentioning there are other easy ways to make improvements.

Another key point worth mentioning is the importance of worker comfort on the line. While buying everyone shoes or equipment may not be economically viable, there are affordable, easy solutions that can be done to increase morale. For example, many studies have shown the importance of workplace water quality has a drastic effect on workers, especially physically active ones.

Lastly, while this may not be a scientifically supported strategy, a box of donuts can go a long way!

Graphene and the Phone of the Future