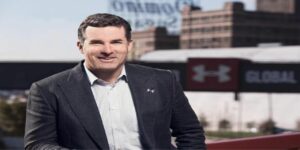 Under Armour is changing its direction with the leadership of Brand Chief Kevin Plank and his vision for a new way to connect with consumers. For more than 20 years, Under Armour has been known for its activewear, but it has been facing increasing competition. Staying relevant to today’s market requires a more direct connection to the customer base, and that’s just what Plank is creating with his new vision.

Plank founded Under Armour and served as its CEO before becoming the company’s brand chief and executive chairman. His focus now is on discovering more about the company’s target customers, finding out what they need and connecting with them. He has identified his customer base as “focus performers,” a type of consumer rather than a full demographic. These customers are highly focused on their performance, and they want a dream to follow and hope to lead them. It’s this connection that Kevin Plank is seeking with these consumers, delivering a full health and wellness experience rather than simply apparel.

The Under Armour Experience

Under Armour is known for its high-quality apparel, but plenty of companies have that to offer today’s customers. One aspect that is setting Under Armour apart is the range of apps that the brand has released. Consumers increasingly want personalized experiences, and apps are playing a big part in that side of fitness. The company has released fitness apps to make it easier for consumers to take control of their fitness and to stay engaged with the process.

The popularity of these apps, including MapMyFitness, has given the company an enormous community of consumers engaged with their fitness goals. Between them, these apps are downloaded more than 70,000 times a day, for a total community of more than 300 million people.

Part of Plank’s vision is working to become a “human performance company” rather than simply an apparel company. The focus is shifting from only the clothing to a full fitness and goal-driven experience. With so many consumers taking an active role in their health and fitness, Plank wants Under Armour to be a part of that movement. The data gathered by the fitness apps is allowing Under Armour to see just how its customers train, how they compete and what their recovery time is like. This gives the company the opportunity to provide what those consumers need for each of these phases for a full fitness performance experience.

Along with this recalibrated focus on the performance journey comes a slogan for the company’s new ad campaign: “The Only Way Is Through.” This phrase is meant to connect with the consumer to inspire them to keep seeking their goals, even through difficult times. It’s an inspirational phrase that consumers can apply to many things in their lives, including their ultimate fitness dreams.

Under Armour has brought a number of world-class athletes into the campaign to inspire customers and show them examples of people who have struggled through difficult times and kept striving to improve their performance. The athletes include swimmer Michael Phelps, football player Tom Brady, and skier Lindsey Vonn. Both Olympic athletes have had well-publicized problems, including injuries, that they had to work through to meet their goals. These athletes are just a few of the 175 inspirational figures who will be a part of the campaign.

The focus of Under Armour on dreams and aspirational goals is perhaps best embodied by one of its new design projects. The company is designing clothing to be worn by private space company Virgin Galactic. This project is part of Plank’s vision of using goals and big dreams to drive both the consumer and the brand.

The enormous reach of the influencers who are a part of this campaign is another way to bring ambitious energy to the brand. These social media collaborators already have a combined 170 million followers, and that audience is already on board the aspirational train. They look to influencers to see the latest items on the market and how they might achieve some of the lifestyles of those posters. That’s exactly the consumer base that Under Armour is trying to reach with this campaign.

Part of this ad campaign will be the 60-second TV commercials, but there will be many other forms of media used to support the new vision. Plank wants Under Armour to be a “loud brand,” and for this campaign and slogan to be heard by anyone who needs the inspiration to get through tough times. Part of that reach will be the posts made by the online influencers. The enormous reach of those online personalities will make it possible to get the message to people who may never have seen the TV spots.

According to data gathered by the company, 73% of people spend a “lot of time online.” That makes it the perfect place to find customers and get them excited about the brand and making fitness goals of their own.

Part of the new approach is to create a community around Under Armour rather than just a customer base. The apps have gone a long way toward developing that community, but the company wants to do more. Being an integral part of the customer’s fitness goals will help to build that following, and smart products, like shoes that track your running, are also helping to create that sense of community. With 1,200 stores currently open and containing 10 miles of storefront space, there are as many ways to engage with this community offline as online.

The new vision of performance and goals is keeping Under Armour relevant, though it may not be seen as the underdog that Plank perceives the company to be. It is becoming a powerhouse in the performance market, and that isn’t slowing down. Last year, 300 new retail stores were opened, and its reach now stretches around the globe. And in today’s world, all of those customers can be a community.

Looking to rent a serviced office? Remember to ask these 5 questions

4 Best and Cheap Cell Phone Plans for Families in 2020