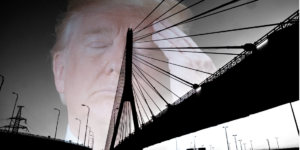 Trump’s infrastructure plan is beginning to take shape. And he’s looking at a number of options to get projects started quickly instead of relying on federal appropriations and slow moving federal contract award processes to create the jobs he’s promised. The infrastructure plan under development includes a number of shifts in public policy.

Trump’s infrastructure plan is expected to include about 1.35 trillion in infrastructure spending, though the ten year total could hit 1.85 trillion. This will be split between new projects and repairing infrastructure that already exists.

About fifty billion dollars is earmarked specifically for rural projects, since private financing isn’t viable in those areas. About a hundred billion is intended for cost-sharing projects where either private businesses or local governments split the cost with the federal government. Roughly $25 billion is allocated for federal infrastructure loan programs.

Another $25 billion is being designated for “American Spirit” projects. These would be the major interstate projects that local and state governments can’t do themselves. Proposed “American Spirit” projects include a railway connection between NYC and New Jersey or high speed trains. However, the current proposal doesn’t list specific projects. Instead, it simply allocates the money for projects expected to boost gross domestic product or, the source of the name of the budget category, “lift the American spirit”. Transportation Secretary Elaine Chao said that the Gateway Program for the Northeast is a priority for the administration but may or may not be built as an American Spirit project. The Senators from New York have asked for fifty billion just to improve New York City’s rail network.

Why the Shift Toward Public-Private Partnerships?

The Trump infrastructure plan is going to encourage state, local and private financing to repair existing infrastructure and build new infrastructure. One of the key strategies is utilizing public-private partnerships.

There are several benefits of focusing on financing split between state and local taxpayers and private partnerships. First, many projects have been on the drawing board for years, awaiting approval or funding. By giving the first 20% or so necessary to get started, this enables work to get started as local governments and private entities raise the rest of the cash.

This is a significant shift in public policy, since federal funding ratios today are typically 80% of the project’s cost. This is on top of his cutting of regulations that were stalling many proposed projects and the bureaucratic permitting processes that made it hard to start breaking ground. The bill itself calls for more cutting of red tape and speedy approval of potential projects.

Second, many jurisdictions can use that federal “seed” money, for partial coverage of the project. Now you’re spreading the work around to hundreds of cities instead of investing in a few pet projects backed by Senators with enough clout for those particular projects.

By only awarding funds to projects that can provide local funding or leverage private investment, far more projects in many more areas are jumpstarted. It also avoids accusations of pork barrel spending and favoritism, since so many more projects with local support are built instead of infamous bridges to nowhere. And a boom in hiring for many different projects around the country is a major plus when your campaign was based on jobs.

Third, dividing up the estimated $200 billion of federal funding into four pools of funds paid out over ten years ensures that money is invested in repairs as well as the new construction that politicians prefer, since it gets their names in the headlines.

Politicians by and large have always prioritized new bridges and highways since it gives them name recognition and something to point at. This is why repairing existing roads and bridges tend to be ignored if there’s a choice between new projects and maintenance. In short, people complain about potholes but celebrate shiny, new construction. This also explains why many states blew stimulus spending on new roads regardless of demand instead of repairing crumbling roads or putting in public transit.

Another reason to support private sector investment to finance projects is because it avoids increasing the national debt, something Republicans in Congress want to avoid. According to many economists, private and public-private financing also leads to more efficient use of funds and finishing projects on time. Compare this to the California high speed train project that ballooned to nearly three billion dollars before it was even completed and many government-managed road projects years behind schedule.

In theory, relying more on private investment will also prevent wasteful spending, since companies won’t invest money in a project unless they expect returns from the investment. This prevents building bike paths no one rides on and fountains almost no one sees using infrastructure funds instead of toll roads that ease local congestion.

A side benefit of public-private partnerships like toll roads and sewer treatment plants paid for through user fees is that it eliminates the cries that people in one state are taxed to build infrastructure in another.

One benefit of the public-private partnership is that by allocating federal “seed” money now to start projects, it gives states and local governments time to raise funds themselves as projects get started and take over construction costs. Such quick wins, compared to two and three year budget allocation processes, are essential to good public relations.

The Chamber of Commerce suggested increasing the gas tax by 25 cents to help pay for new infrastructure spending. This is notable because it is unusual for that entity to ever recommend a tax increase. Another option is implementing a mileage tax, something that would raise money from battery electric and hybrid vehicles that use the roads but don’t use much gas.

Trump’s proposed 1.35 trillion in infrastructure spending represents a major shift in federal policy. It would rely less on federal grants and more on local spending, state spending and private investment. Mostly rural projects and interstate projects would be funded entirely through federal funding, since it is projects in metropolitan areas that could find private investors or local governments willing to work together to fund repairs and new construction. The infrastructure plan would be partially funded through reductions in spending in other federal budget categories, though increases in the gas tax have been proposed.

Try These Pasta Cooking Hacks That Will Change Your Life