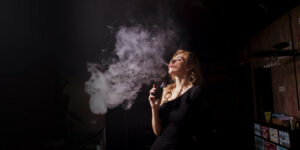 In 2002, the World Health Organization found that 15 billion cigarettes exchange hands every single day with global tobacco companies spending more than $1 million an hour in advertising. During those times, the tobacco industry’s prowess was enormous, a position it still holds even today. Though the entire industry is ruled by these tobacco companies with a total market capitalization of nearly $800 billion, this trend might not last for a long time, especially with how fast electronic cigarettes are entering the ecosystem.

Vaping is fast entering the entire industry and is pegged to reach a $27 billion market valuation with a 16.6% CAGR by the year 2022. According to the Research and Markets’ report Global E-Cigarette Market Size, Share, Development, Growth and Demand Forecast to 2022, the tobacco industry is going to see a major disruption from E-cigarettes – and the fact that the knowingly old tobacco industry is going to experience such a disruption in less than three decades is a major shift worth considering.

And as Stewart Brand puts it,

These shifts have seen major tobacco companies getting engaged in the vaping industry – with the institution of funds and research into the new industry that is a threat to their own existence. Not only are these companies researching into the new innovations in the vaping industry, but they are equally building and acquiring firms in this space. For example, Vype is a vaping brand owned by British American Tobacco, Imperial Tobacco owns the vaping brand Blu, and Reynolds America’s subsidiary owns the brand VUSE.

What Research Say About Vaping

Society largely sees tobacco firms as having bad influence to social and health lives. That is why these firms are banned from directly advertising in many countries, and even in countries where they are allowed to advertise or operate freely, their markets are being comprehensively controlled. Though vaping is seen as an equally smoking endeavor by many, how it is treated in many countries differ from that of normal smoking. Many countries see vaping as a way of helping already existing smokers to quit smoking tobacco-based cigarettes, which cause deadly health hazards. This has increased tobacco companies’ research into the area and how they can gain from the disruption.

Smoking is known to have serious health hazards and takes thousands of lives annually. With vaping, the health hazards are minimal and might not have the same deadly effects as normal smoking, and thus good for people who have smoked for so many years. Vaping can help normal smokers to reduce their lung-related diseases but newbies are encouraged to not smoke or enter into vaping at all because they are all hazardous to the human body.

Though vaping is known to contain its own health issues, a lot of studies have shown that e-cigarettes are still a far better choice as they help reduce health hazards in old smokers. But on a general note, people are encouraged to quit smoking, be it vaping or normal smoking as both of them have health hazards that dwindle the human body over time.

Why is China an attractive destination for foreign investors?