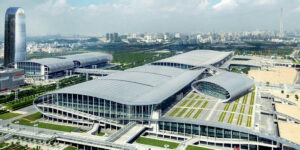 One of the world’s fastest growing economies, and maybe soon the world’s largest, China is a place to keep your eye on. A logical consequence of this growth is the increasing popularity and authority of the country’s largest trade fair, The Canton Fair or commonly referred to as CIEF – China’s Import and Export Fair.

The Canton Fair has a 60 year history of hosting international exhibitions. It first opened its gates in the spring of 1957 in Canton (Guangzhou) China as The Chinese Exports Commodities Fair. To get an idea how big “the biggest” is in China we can take a look at the numbers.

The fair has an exhibition area of 1,180,000 (one million one hundred and eighty thousand) square meters (that’s some 165 football fields) divided under 60,250 booths.

The 120th Canton Fair session ended on the 4th November 2016, making the fair not only the physically largest fair in China but also helping the fair break a few other records in the country, like

Despite its enormous dimensions, the fair is very well organized and the management is constantly optimizing the way companies can interactive to increase the benefits for sellers and buyers a like. A good example is the upgraded International Pavilion, which attracted a lot of the big international names like JD.com, Carrefour, Lotus and many others.

This year Mr. Quandong, Deputy Director General of the Foreign Affairs office of the Canton Fair, put emphasis on renewable energy products. The fair showcased PV modules/ systems, solar water pumping systems, air conditioners, wind and geothermal based energy products, solar energy products, solar thermal equipment and other relative products, in the same phase as other electrical and electronic products to increase interaction between the industries and give the 600 attending companies (from 40 different countries) a smoother and optimized experience.

Considering the constant growth that the Canton Fair has been experiencing, its impressive size and the engagement of the organizers, it is easy to predict that the upcoming 121st Canton Fair will most probably break the existing records.

The focus on the latest technology trends and renewable energy will definitely make the fair a magnet for young entrepreneurs. The number of attendees from around the world is strong argument for even more companies to join the fair in the future, giving it the potential to become one of the most popular fairs worldwide.

The Future of Virtual Reality: Where Will VR Make the Biggest Impact?

HummingBad and Worse: Android Malware to Watch Out For