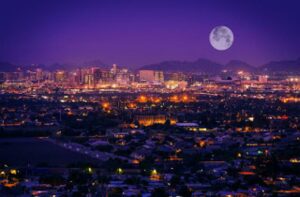 The Phoenix startup scene has been blossoming over the past several years, but now things are really starting to ramp up. In the tech sector alone, Phoenix has seen an increase in employment of 78 percent since 2000, and software tech employment has increased by almost 29 percent since 2010, according to this Forbes report. Some of this growth is due to Silicon Valley companies relocating or opening regional offices in the area, but no one can deny the role that entrepreneurship is playing in this tech startup boom.

Starting up in the Valley of the Sun

The area has seen an increase in incubators and accelerators that help startups and early-stage growth companies. Arizona State University, one of the nation’s largest public universities, offers two incubators on campus: the ASU Startup Accelerator (ASA) and the Furnace Accelerator. Along with these incubators, ASU provides theEdson Student Entrepreneur Initiative that awards student teams with $20,000 in seed funding and up to 12 months of acceleration and support services.

Christie Kerner, director of the Center for Entrepreneurship at ASU, sums it up well: “We have a strong ecosystem —ASU, of course, plus mentoring engagement from those who have reached success in their ventures, helpful government partners, and an enthusiastic and generous community of entrepreneurs who support and rally each other. Match all that with the reasonable cost of living and endless days of sunshine, and it’s no wonder Phoenix’s reputation as a perfect place for business is on the rise.”

A variety of tech companies are gaining national and international prominence from their home bases in Phoenix. Here are five up-and-coming startups to watch.

ClearVoice is content marketing software that brings together content marketers and freelance writers to streamline the content creation process. ClearVoice was one of six companies that won the fall 2015 round of the Arizona Commerce Authority’s Innovation Challenge, a bi-annual business plan competition. According to thePhoenix Business Journal, ClearVoice cofounders Joe Griffin and Jay Swansson want ClearVoice to do for content “what QuickBooks does for accounting.”

Tuft & Needle is a Phoenix ecommerce startup focused on one important goal: producing the perfect mattress. They must be onto something —after all, Tuft & Needle is the top-rated product in its category on Amazon, and their return rate is reported to be under 1 percent. Not only did this team create a high-quality, affordable mattress, theydeveloped their own fulfillment software to improve supplier communications and decrease order errors.

CampusLogic is on a mission to “make financial aid awesome.” The company offers cloud-based technology to simplify financial aid. As of October 2015, this financial aid self-service platform is used by over 40 colleges and universities as their financial aid storefronts to provide over 300,000 accounts with mobile access to financial aid information and application.

Galvanize is an education-focused organization that provides training to entrepreneurs and workers in software development and data science. Galvanize describes its campuses as “. . . home to an eclectic mix of entrepreneurs, skilled programmers, expert data scientists, and men and women motivated to make an impact.” The Phoenix Galvanize campus is slated to open in late 2016 in the Phoenix Warehouse District. The Phoenix Galvanize campus will offer training, as well as coworking space, to dozens of startups and established companies.

AniCell BioTechdevelops regenerative treatments for dogs and horses through stem cell therapy. AniCell BioTech’s approach is harvesting stem cells from the amniotic fluid with the resulting stem cells provided to patients via IV instead of invasive surgical intervention. AniCell BioTech treatments are reported to accelerate the regeneration of tissue and bone. In March of this year, AniCell was selected to participate in the 2016 Flinn Foundation Bioscience Entrepreneurship Program.

Phoenix on the Rise

Dan Tyre is director of sales at HubSpot and a speaker, writer and business coach. He splits his time between the Valley of the Sun and HubSpot’s home base of Cambridge, Massachussetts.

“I was at an event in downtown Phoenix last week that had literally 1,000 participants. It was a fun, diverse and motivated crowd, and it was a stark contrast with events from previous years. I interact with dozens of new companies on a monthly basis that are looking for help or guidance or potential investment. It is a measure of the progress that we have made in Arizona, that there is this vibrant community that is fostering companies of all sizes who are looking to grow and compete in the local and global economy.”

The tide is definitely turning, and Phoenix is on its way to becoming the Silicon Desert.

Is This Really The iPhone 7 Prototype?

Assignment Writing No Longer An Issue For Youngsters